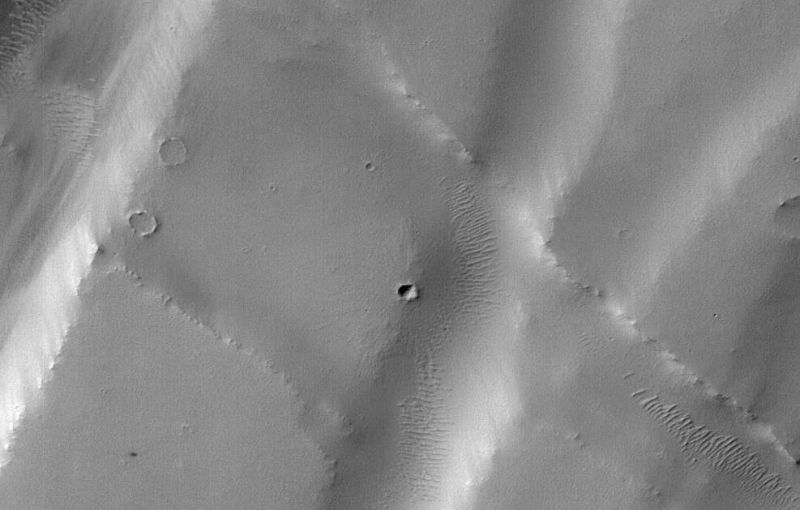 The neural network analyzed the photographs of the MRO probe and discovered several new craters on the surface of Mars, which were formed from 8 to 10 years ago. The NASA Jet Propulsion Laboratory (JPL) writes about this on its website.

“Our dream is to integrate such a system into the onboard electronics of Martian orbiting probes. Now all the images they take are sent to Earth, and scientists analyze them only there. It takes a long time. We hope that in the future, artificial intelligence systems ( AI) will select photographs of interest to scientists while still in orbit, “said Michael Munier, an astronomer from Georgia Tech (USA).

Now, most planetary scientists assume that in the early eras of existence, Mars was very similar to Earth. However, this did not last long, about a billion years after its formation. At the beginning of the so-called Hesperian period, about 3.6 billion years ago, it turned into a lifeless desert.

Due to the rarefied atmosphere and low air temperature, erosion on Mars proceeds rather slowly. As a result, traces of falling of even the smallest meteorites remain on the surface of this planet for a long time. Therefore, astronomers use Mars as a kind of testing ground for studying how often asteroids bombard planets.

“Census” of craters on Mars

Mounier and his colleagues have taken a big step in this direction. They have created a neural network that can very quickly study the images of the MRO (Mars Reconnaissance Orbiter) probe, and look for characteristic traces on them that have left recent falls of meteorites and other small celestial bodies.

To train this system, scientists prepared nearly 7,000 photographs taken by the CTX camera during flights over the surface of Mars. Astronomers have marked all known craters in these images, and then processed them using a neural network.

When she learned to find all the craters in these images, astronomers used her in order to analyze the entire archive of CTX images, that is, more than 112 thousand photographs. This analysis showed several dozen potential new craters on the surface of Mars.

Scientists selected one located in the Noctis Fossae region on the equator of Mars and tried to point the HiRISE camera at it. It turned out that in this region there was not one, but several small craters at once. Scientists suggest that they arose in 2010 and 2012.

In the near future, astronomers want to check if there are two dozen more craters that the neural network found in photographs of the surface of Mars. Researchers hope that in the future, planetary scientists, thanks to similar algorithms, will conduct a complete census of craters on Mars and highlight the most interesting of them.