The new facts about Ceres 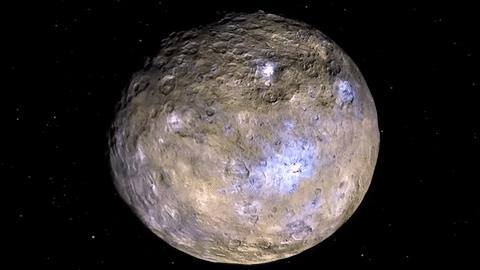 Two new researches published in the magazine Nature shed some light on mysterious bright spots which cover the surface of the dwarf planet Ceres.

Even earlier, than the Dawn spaceship belonging to the American Space Agency NASA arrived to the dwarf planet, these light spots were found on images from KA of “Dawn” who were made from far away.

More close overseeing by the beauty by Ceres helped scientists to find in total more than 130 bright spots on the surface of the dwarf planet. Many of these areas are concentrated in shock craters.

One of researches which was conducted under the leadership of Andreas Natues from the Max Planck Institute suggested scientists an idea of what falls into with one of principal components of the bright spots which are present at area to magnesium sulfate type (inorganic salt). It is known as geksagidrit.

The research assumes that salt deposits were created after water ice was sublimated. Then in the course of collision with an asteroid, the material which is under a surface was brought to the surface, having released salt deposits. Considering the global nature of bright spots on Ceres, it is possible to assume that under the surface of this dwarf planet there is a magnesium sulfate layer.

In the second research the scientific Dawn team used data of a visible and infrared spectrometer to look at structure of Ceres and found proofs of clays rich with ammonia. While traces of ammonia would evaporate from the surface of Ceres very long time ago, ammonia molecules, the bound to minerals, such as clay, could remain.

This opening says that Ceres was created not in a belt of asteroids at all between Mars and Jupiter where the dwarf planet is now. Presence of clays of ammonia assumes that Ceres could consist of material which is from more cold vicinities of an outer Solar System. Thus, a time later Ceres could migrate from the place of the emergence to the place of the urgent dislocation.

It should be noted that at the moment the research probe “Dawn” reached the terminating orbital height around Ceres and “parked” at the height of 385 kilometers from the surface of the dwarf planet.