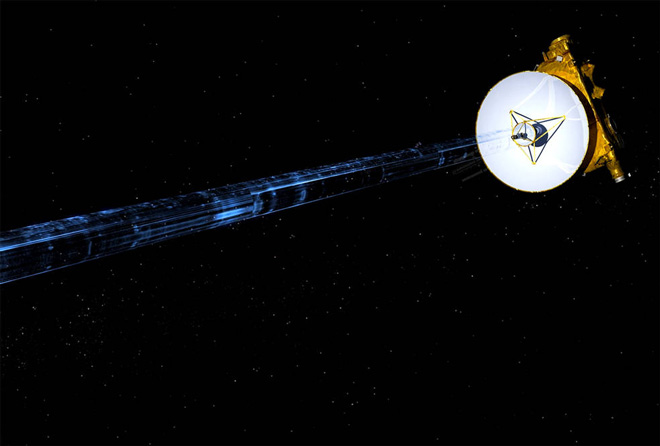 The New Horizons spacecraft, at last, stopped to send home information which it collected during historical approach to Pluto in July, 2015.

The last bit of information was received by control center of flight of laboratory of applied physics of Jones of Hopkins in Maryland early in the morning on Tuesday, October 25. “The new horizons” is at distance of 5,5 billion km now from Earth therefore signals from it reach scientists of a mission in 5 hours.

“Data on system of Pluto which collected “The new horizons” surprise us with beauty and complexity of the dwarf planet and its system of the moon again and again” — the chief researcher of “The new horizons” Alan Stern from the Southeast research institute in Bouldere says, Colorado.

“Ahead a lot of work to analyse more than 400 scientific observations which arrived to Earth — Stern adds. — And it just what we are going to make. Besides, who knows when information from other spacecraft which visited Pluto arrives?”

The mission “The new horizons” was started by the budget of 700 million in January, 2006 on purpose for the first time to approach Pluto. The device made historical approach on July 14, 2015, having approached on 12 550 km the ice surface of the dwarf planet.

“The new horizons” collected more than 50 gigabits of information during the close meeting — in 100 times more, than could send home directly. Therefore the team of a mission ordered to the probe to send the first the most priority data right after approach. The remaining balance of information was transferred on drops the last 15 months.
And now all work is made.

The team of “The new horizons” will be convinced that all information on approach to Pluto in safety, and then will clear onboard memory of the spacecraft to make room for further observations.