The new method will make it possible to predict solar flares 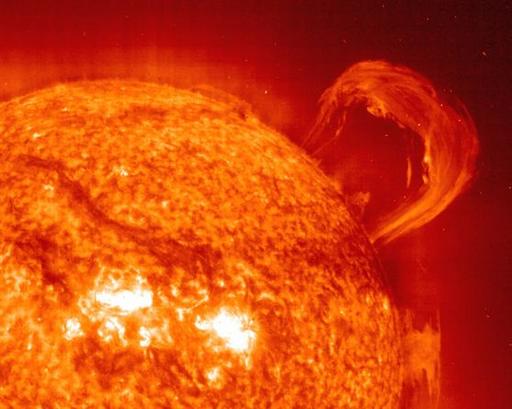 Our Sun, whose activity is constantly changing, sometimes bursts out bursts of particles moving with great speed. In a new study by scientists from NASA has proposed a method which allows to determine the characteristics of the emerging solar flare by several tens of minutes earlier, in comparison with existing techniques of prediction of the phenomenon of space weather –minutes, which is crucial for the protection of astronauts in space.

The Earth’s magnetic field and atmosphere protects us on the surface of the planet from most of the negative effects of cosmic radiation, however, astronauts are in low earth orbit or in the future, perhaps in the interplanetary space is much more susceptible to the effects of space weather, including the events of the eruption of fast-moving solar particles, called the solar high-energy particles (solar energetic particles, SEP).

An important challenge facing NASA is to protect the astronauts from the eruptions of solar particles, including particles SEP. In the new work, researchers led by Chris Saint Cyrus (Chris St. Cyr) from the center of Goddard NASA showed that the tracking of other events occurring on the Sun – coronal mass ejections – can help to predict the emissions SEP.

Scientists have observed coronal mass ejections using coronagraph, an instrument that blocks the solar disk and allows to see only its atmosphere, or corona. Coronography installed on the spacecraft, have a good overview of the Sun and its surroundings, but data transfer with them is slower than similar ground-based instruments, which often can prevent to register fast-moving solar particles before they reach the Ground and cause irreparable damage. The work of the St Cyrus and his team have demonstrated a new method based on the analysis of data on coronal mass ejections obtained with ground-based Observatory K-Cor, located in Hawaii that allows you to predict approaching the Earth particles SEP in about 45 minutes before their arrival. This method can be very useful in the prediction of SEP events, experts say NASA.