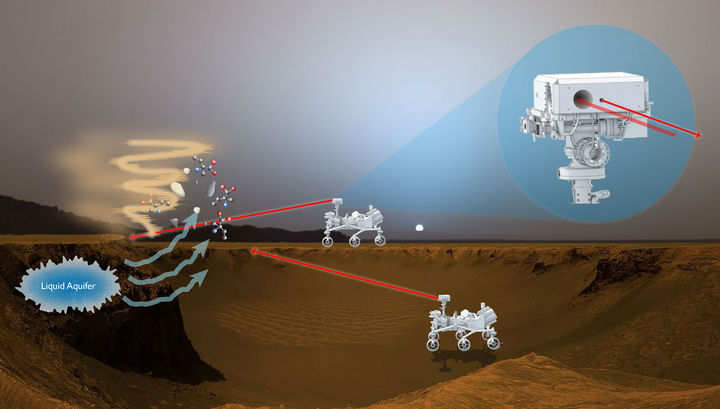 The method of sounding of air by means of which the American military look for life-threatening toxins, gases and microorganisms in the future will help to answer a question: Whether “There is life on Mars?”. Specialists of NASA space agency created a prototype of the device which will be able “to sniff up” literally traces of live organisms on other planets.

The technologist Branimir Blagojevic from the Center of space flights of Goddard (GSFC) worked earlier in the company which created the sensor for detection of biological threats. Having passed to work into NASA, he decided that the similar analyzer can serve also for space research.

The bio-indicator lidarny tool (BILI) is based on LIDAR technology which is capable to find and analyze structure of particles in the atmosphere by means of the reflected light. Similar tools were already used for climatic researches of Earth, but now scientists plan to involve them far outside our planet.

Blagojevich’s team suggests to place BILI on one of the following mars rovers. The device will scan surrounding space in search of dust clouds. In case of the last the device involves two ultra-violet lasers which will pass a series of impulses through dust. Under the influence of light of a particle begin to resound and fluoresce, and the device will determine by the analysis of their luminescence whether there are among them organic compounds.

It is the most important that BILI can mark in real time the minimum concentration of complex organic materials from distance in several hundreds of meters. Thus, rover equipped with the new equipment will have an opportunity to look for life traces in almost impassable places, such as craters and slopes of mountains. Besides, remote researches exclude a possibility of pollution of samples and misstatement of the received results.

“Our tool will perfectly add other devices of organic detection which we could use in a tandem for bigger sensitivity, for example, mass and spectrometer sensors can measure only a small amount of material for time, – Blagojevich in the press release of NASA says. – Our device don’t require anything, except the electric power, and can survey extensive areas”.

Let’s remind what before NASA declared complete transparency of researches: now the works financed by department will be provided in open access and is absolutely free.