The noctilucent clouds are seen from space as bright flashes 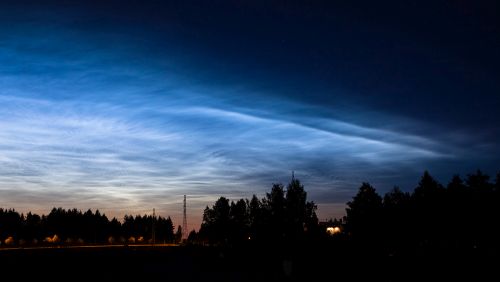 Noctilucent clouds are the highest clouds in the Earth’s atmosphere. They are formed in the mesosphere at an altitude of 75 to 85 km. They are usually not visible from the surface of the Earth in the daytime. In the northern hemisphere, noctilucent clouds appear from May to September. They got their name due to the optical effect – in twilight they are visible in the evening sky as very bright, because already hiding behind the horizon the sun can only highlight high enough objects. The optical density of clouds of clouds is negligible, and through them stars are often glimpsed. There are noctilucent clouds of small ice crystals.

It is the silvery clouds, according to researchers from NASA, are the cause of the outbreaks recorded by NASA research spacecraft, designed to study the planets of the solar system.

Flares in the Earth’s atmosphere were recorded at a distance of about two million kilometers by optical instruments directed at our planet. The nature of the outbreaks remained unclear for a long time, and only in 2016, after a careful analysis of more than 800 cases of fixing an unusual phenomenon, experts came to the conclusion that the cause of flares is the reflection of sun rays from ice crystals in the upper layers of the earth’s atmosphere.

The results of the NASA study are published in the online scientific publication EOS.ORG.

The results of the study can be used to identify ice crystals in the atmospheres of other planets.