The Opportunity Rover celebrated its 13 year life on Mars 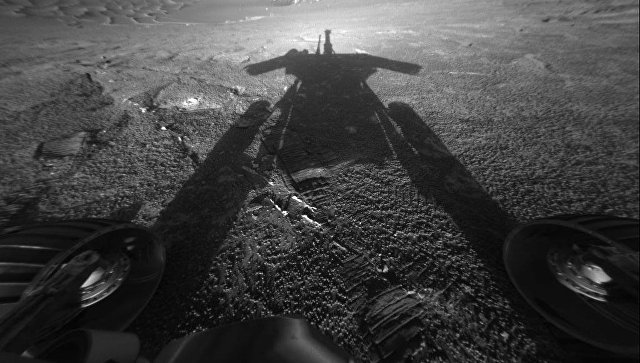 The Opportunity Rover successfully survived the Martian winter and was celebrated last week his 13th day of life on Mars, continuing to move to the edge of the endeavour crater, according to NASA.

“The fact that we have lived up to 13 birthday of the mission with a fully functioning Rover, which every day makes new discoveries about the past of Mars, is an amazing fact. All this is due to the fact that Opportunity – a true American car, well tested and efficiently made,” says ray, Arvidsson (Ray Arvidson), head of mission of NASA, quoted in the edition of Universe Today.

According to Arvidson, the Rover is now in good condition, and its solar panels, despite the winter season, produce a lot of power, allowing NASA to perform quite difficult and risky maneuvers, including climbing the steep slope.

In one of these episodes, the soil collapsed, but the Rover nothing bad happened – on the contrary, scientists were rewarded by the fact that a mini-landslide revealed interesting deposits of rocks under Martian Sands, which Opportunity studied before to continue on the slopes of the crater endeavour.

All last year the Rover-the veteran spent in the so-called “Marathon valley” – a small plain, in which the MRO satellite in the recent past discovered large deposits of clay and other sediments, formed in the presence of water. Study them with the help of the Rover, he says, has allowed to find new rocks that used on Mars are not found, and to find traces of their active interaction with water in the form of cracks and deposits of clay.

Now, Opportunity is on the edge of endeavour crater and heading towards the valley Wilamette two kilometers from the current position of the Rover, outside the crater in the so-called “spur of Byron”. Recently, scientists saw signs of ravines, dug by water, the photographs of the probe MRO.

Three years ago, Opportunity has already shown that water is indeed present on the surface of Mars in liquid form in the past, thus confirming the data obtained by the Curiosity Rover in 2012. As I hope the researchers, the study of valley Wilamette will shed more light on what looked like Mars in the past and what role in his life played water.

At the moment, the Rover is a veteran is 52 “life” – originally NASA had planned that the Rover will last only three months, but he is already a year continues to set new records. Opportunity is now in excellent condition, and it works, after a recent reformat of memory is on the cutting edge.