The origin of the ring system around the centaur 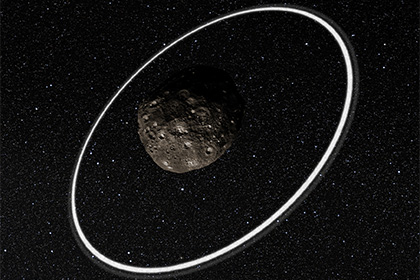 Astronomers from Argentina and Spain presented the most likely scenarios for the formation of a ring system around the centaur (10199) Hariklo.

Specialists considered three scenarios for the formation of the ring system in (10199) Khariklo.

The first hypothesis presupposes tidal destruction by the centaur of his companion after he reached the limit of Rosh. To this end, the moon (10199) Hariklo should be located 6.5 kilometers further from the centaur than today’s ring system. Meanwhile, astronomers believe it is unlikely that the light (10199) Khariklo could destroy his companion.

The second scenario involves the clash of the ancient moon (10199) Hariklo with the heavenly body. The fragments formed after such an event, and could form a ring system of the centaur.

The third scenario presupposes the clash of the (10,999) Chariklo with the heavenly body. This generated emissions into the surrounding space, which formed a ring system.

Centaurs are a group of asteroids located between the orbits of Jupiter and Neptune. The two largest such objects, (10199) Khariklo and (2060) Chiron, have ring structures. In diameter, these celestial bodies exceed 200 kilometers.

Earlier, scientists suggested that the rings around centaurs (10199) Hariklo and (2060) Chiron arose as a result of the gravitational influence of giant planets.