The oxygen atoms detected in the upper atmosphere of Mars 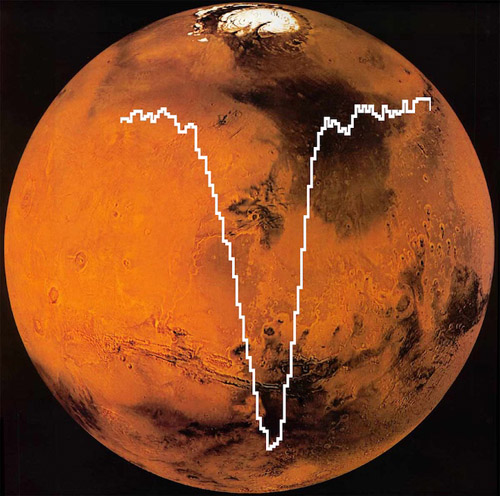 For the first time in 40 years of observations of Mars equipment Stratospheric Observatory Infrared Astronomy (SOFIA) has recorded the presence of atomic oxygen in the atmosphere of the Red Planet. The oxygen atoms are found in the upper layers of the Martian atmosphere, known as the mesosphere.

Atomic oxygen affects the behavior of other gases, thus providing a significant impact on the planet’s atmosphere. The researchers found only half of the expected amount of oxygen that can be associated with changes in the Martian atmosphere. The scientists plan to continue research using SOFIA, to understand the nature of these changes.

“Atomic oxygen in the atmosphere of Mars is very difficult to measure, – says participant in the project SOFIA Pamela Marcum. – In order to explore the far infrared wavelengths necessary for the detection of atomic oxygen, scientists must rise above the Earth’s atmosphere, the use of highly sensitive instruments. In this case, the spectrometer was used. SOFIA We have such opportunities.

The last time such measurements of atomic oxygen in the atmosphere of Mars were made by the missions Viking and Mariner in the 1970s thanks to the place of accommodation SOFIA, which flies in the 11-13 kilometers above the atmospheric moisture blocking infrared radiation. Advanced detectors installed at the observatory (German Receiver of astronomy at terahertz frequencies (GREAT), in particular) have allowed astronomers to distinguish between oxygen in the atmosphere of the Red Planet on the oxygen of the Earth’s atmosphere.