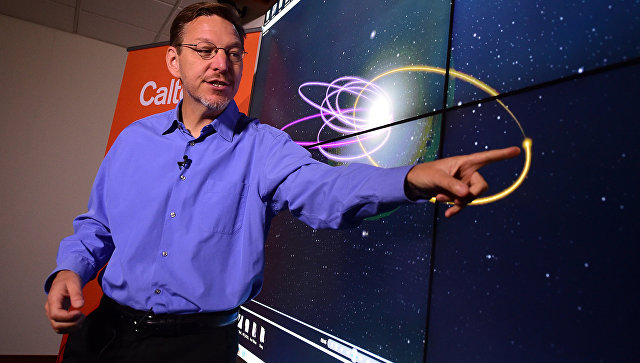 The planetologist Michael Brown found out that mysterious “the planet X” forced the Sun “to turn” the axis by 6 degrees and influenced driving of all other eight planets what he told at a press conference in the American astronomical society about.

“All planets “live” move around the Sun on one plane, deviating it by one-two degrees. On the other hand, the spin axis of the Sun is inclined to it by 6 degrees that is strange, considering that planets and a star were born in one flat gas-and-dust cloud. The riddle of why it so, concerned all of us from 50 years of the last century, and “the planet X” as it appears, is the answer to it. It was huge “lever” which sluggishly “inclines” planets in the party” — Brown tells.

At the beginning of January two famous planetologists, Brown and Konstantin Batygin, his colleague from California Institute of Technology, declared that they managed to calculate situation mysterious “planets X” – the ninth planet of the Solar system remote from the Sun on 41 billion kilometers and weighing in 10 times more, than Earth.

Thanks to huge distance to this planet – one revolution around the Sun “the planet”, by estimates of scientists, makes X for 15-17 thousand years – we do not know yet where it is, and we have no evidence of its existence, besides the strange nature of driving of a number of dwarf planets and asteroids in the Kuiper belt.

Only the approximate orbit of this object inclined in relation to the plane of rotation of other planets by 30 degrees is known, and now scientists compete in the one who the first will manage to find it or to prove that Batygin and Brown’s find does not exist actually.

At the moment searches “the planet X” did not bring progress – Brown, Batygin and their “competitors” managed to limit a zone of searching of this planet only. Some other scientists in general doubted its existence, having noted that its existence would bring instability in behavior of already open worlds in the Kuiper belt where there is this hypothetical huge planet.

As Brown told, to him, Batygina and Renu Malhotra, one of leading experts in area of dynamics of orbits of planets, managed to find one more evidence of existence “planets X”, studying how the shape of Solar system from eight planets and Pluto has to exchange if “to add” the similar giant planet to it.

The idea to carry out similar calculations, according to Malkhotra, came to it while she noticed that the periods of orbits (time of commission of one round) of four most far-out dwarf planets of Solar system – Sedna, 2004 VN112, 2012 VP113 and 2010 GB174 – correspond to each other as integral numbers. It indicated that they are in a resonance with some other celestial body which is located further away.

Having combined the efforts with Brown and Batygin, Malkhotra created computer model of “newborn” Solar system in which astronomers placed “the planet X” in that point where it presumably is, inclined its orbit, and “scrolled” time forward on several hundreds of millions of years.

As Brown when they “inserted” the planet found him into model of Solar system notes, they actually received at once the necessary picture – as a result of its emergence the spin axis of the Sun was inclined by 6 degrees, and in the “exact” party, and the structure of Solar system got its current form. The fact that results of model operation and reality coincided yes sir as Brown considers, says that “the planet X” surely exists.

“It turned out that “the planet X” forces the plane of an ecliptic and all planets to shake in it up and down just as the untwisted spinning top moves. However in this case this “spinning top” very sluggish, and its hunt effects last about four billion years. Actually, not the Sun changed the spin axis, and all other planets were keen on an attraction “planets X” — the scientist tells.

Moreover, these calculations, according to Brown, narrow the field of searching “planets X” twice which total area makes about 400 square degrees now that is approximately equal to the area of “average” by the constellation sizes. As the scientist considers, it is in vicinities of a point of the maximal removal from the Sun now, is about one thousand times farther, than Earth will be spaced from a star.

“I consider that we are very close to opening “planets X” – by next winter as I hope, one of nine groups of astronomers including we which are occupied with searches of this planet will be able to find it in the night sky” — continues Brown.

Who exactly will open it, it is not important – as Brown told, he does not consider that between it both Batygin on the one hand, and Scott Sheppard and Chad of Trujillo, the cruel competition in a race on searches “planets X” exists other famous planetologists.

“I do not think that we have to “win” against someone this race – it seems that there are nine or ten collectives occupied with searches of the planet. I personally did not put on one of these groups. Someone uses interesting and heterodox methods of its searches including searching in contemporary records, someone as we and Shepard’s group, uses old-fashioned observations by means of ordinary telescopes, and I would not tell that our chances are higher, than at others” — the planetologist explains.

According to Brown, neither his group, nor their “competitors” hide from each other the obtained data and constantly exchange them including information on where it is the best of all to look for it. The similar policy and the fissile engaging of the fresh heads to searches “planets X” as the planetologist considers, will lead to its fastest opening.