The planetary system TRAPPIST-1 was older than the solar system 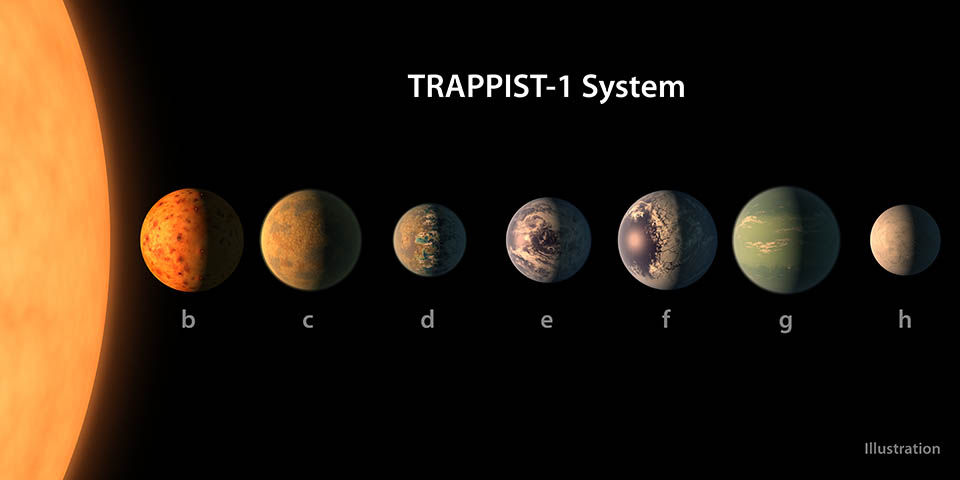 Scientists have received a new estimate of the age of one of the most intriguing planetary systems discovered to date – the TRAPPIST-1 system, which includes seven planets the size of the Earth, circling around the super-cold dwarf star, about 40 light-years away. Researchers report in a new study that the star TRAPPIST-1 is quite old – its age ranges from 5.4 to 9.8 billion years. This is almost twice as large as the age of our solar system, which is estimated at about 4.5 billion years.

This estimate of the age of the TRAPPIST-1 system was conducted by a team of NASA scientists led by Adam Burgasser of the University of California, San Diego, USA, and is based on an analysis of the orbital velocity of the star around the center of the Milky Way (older stars move faster) The chemical composition of the star’s atmosphere and the frequency of flares on its surface.

TRAPPIST-1 systems were opened earlier this year using the Telescope Transiting Planets and Planetesimals Small Telescope (TRAPPIST), located in Chile, the NASA Spitzer Space Telescope (“Spitzer”), and other terrestrial Observatories. Three of the planets of the TRAPPIST-1 system are in the inhabited zone of the star, that is, at such a distance from the luminary on which the stony planet can have water in liquid form on the surface. All seven planets are in tidal capture in relation to the star, that is, day and night on different sides of each planet last “forever”.

In general, the chances of the planet to be inhabited are not determined uniquely by the age of the star: on the one hand, young stars burst with frequent powerful flares that can destroy all life on the planet, and on the other hand, “mature” stars for many millions of years can “blow away” the atmosphere From the surfaces of the planets in their planetary systems, as happened with Mars in the solar system. Further research will help to understand the influence of the age of the TRAPPIST-1 star on the potential habitation of the planets of its system, the authors note.