The planets in the TRAPPIST-1 system can have an atmosphere 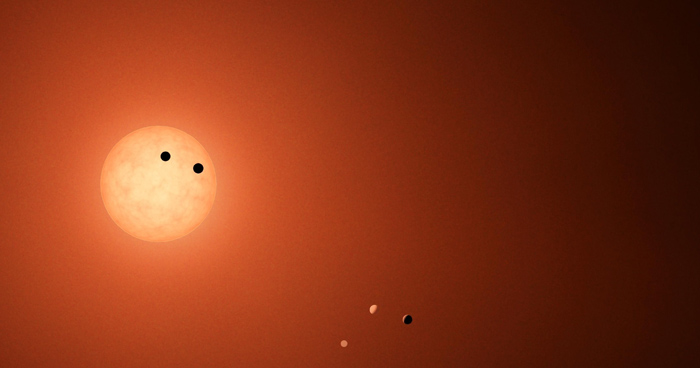 In November 2017, astronomers claimed that the high activity of TRAPPIST-1 does not allow the planets of its system to retain and form the atmosphere, and therefore it is impossible to colonize them. However, a new discovery shows that we still have chances for space expansion.

According to a new study published in the Proceedings of the National Academy of the Sciences, the outer planets of stellar systems can retain their atmospheres even under the aggressive influence of a star. This conclusion, despite previous studies, gives hope that the exoplanet in the TRAPPIST-1 system can still potentially be suitable for colonization in the future.

Recall that in 2017, astronomers confirmed the existence of a planetary system of 7 planets from the star TRAPPIST-1. Their sizes range from the approximate diameter of Mars to almost terrestrial, and at least three of them are in the so-called “habitable zone” – and therefore can be suitable for life.

But TRAPPIST-1 is a red dwarf star, whose activity is much higher than that of the Sun. Stellar matter emissions are so intense that for a planet relatively close to the star, they pose a threat: previously astronomers believed that in such conditions the atmosphere would simply be “blown off” by the solar wind into space, and the planet would remain an ordinary piece of stone.

A new study claims that the planets -1g and -1h still have chances to maintain their atmosphere even in such difficult conditions. In 2019, a telescope named after James Webb will be launched into the Earth’s orbit, which will dot the i: according to scientists, its power is enough to learn all the details and make a final conclusion.