The poles of Uranus change places every day 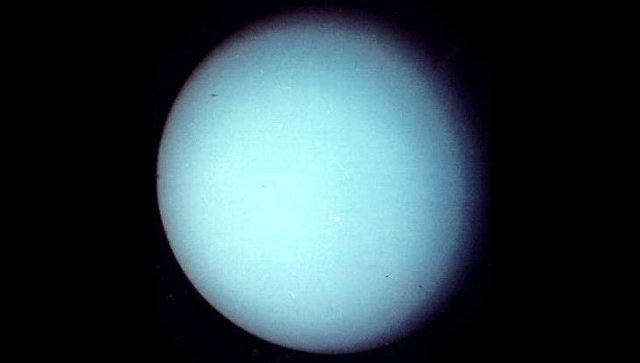 The magnetic field of Uranus was extremely unusual and unstable – the giant planet changes its poles in places every day, say scientists in an article published in the journal JGR: Space Physics.

“Our observations show that the magnetic shield of Uranus does not stand still and its position depends very much, in addition to all other factors, on how it rotates around its axis.This radically distinguishes Uranus from the Earth or any other planets of the solar system,” – Said Carol Paty (Carol Paty) from the Georgia Institute of Technology in Atlanta (USA).

Uranus is the only planet in the solar system that rotates “lying on its side,” its axis of rotation lies in the plane of its orbit. At the same time, the magnetic poles of Uranus are shifted relative to the geographic at an angle of 60 degrees. On Earth this deviation is only 11 degrees, which allows us to use a magnetic compass in order to determine the direction to the geographic pole.

Scientists believe that the shift of the magnetic poles is due to the fact that the planet’s magnetic field generates a salt ocean hidden under its dense atmosphere. The reason for this shift and why the planet rotates on the “side”, as planetologists today believe, was a series of powerful clashes between Uranus and large “embryos” of the planets in the distant past.

Pati and her colleagues discovered another unusual feature of the magnetic field of Uranus, trying to reproduce how the magnetic field and atmosphere of the giant planet interacts with the solar wind. These unusual data, which scientists could not explain until now, were obtained back in 1986, when the Voyager-2 probe passed by Uranus, received the first photographs and scientific data on the giant planet and its satellites.

The unusualness of this data was how the astronomer tells us that the atmosphere of Uranus was “closed” with magnetic shields on some days and was not bombarded with particles of the solar wind, while in others it was completely defenseless against its pressure.

Trying to understand how such things could happen, the authors of the article created a computer model of Uranus’ depths, taking into account the data from Voyager-2, and calculated how its magnetic field varies with time.

These calculations led to extremely unusual results. It turned out that at certain times of the year, such as the days of the winter or summer solstice, the magnetic field of Uranus looks like a kind of giant “knife switch” that switches the position of the planet’s poles every 18 incomplete hours, exactly one day in Uranus.

These switches, as the scientists say, give rise to peculiar “holes” in the magnetic shield of the giant planet, the birth of which was fixed by the Voyager-2 probe thirty years ago. Similarly, according to Pati, other planets similar to Uranus, dozens of which have been discovered in recent years by the telescope Kepler and other observatories, can behave.

Therefore, the study of Uranus, including using new probes, can become the key to understanding how such planets are constructed and whether life can exist on their satellites if they are inside the “zone of life,” scientists conclude.