The presence of a warm ocean on Enceladus is proved 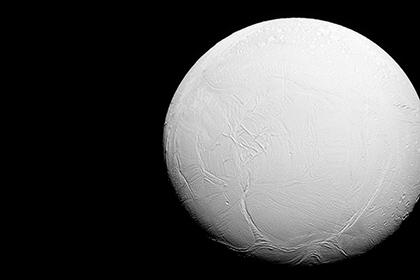 Planetary scientists from France and the USA presented new evidence of the presence of a subsurface warm ocean on Enceladus, one of Saturn’s satellites. In the depths of the reservoir there can be life.

Scientists have discovered intense thermal radiation coming from the bowels of Enceladus. It is estimated that its source is located 30-50 kilometers north of the “tiger grooves” of Saturn’s moon. The available data indicate that at a depth of several kilometers below the surface of the south pole of the moon there can be a huge ocean of liquid water.

The scientists came to their conclusions by analyzing the data received on November 6, 2011 by the scientific instrument RADAR (Radio Detection and Ranging Instrument) of the space station Cassini. Then the device was at a distance of about 500 kilometers from the moon.

Enceladus is the sixth largest satellite of Saturn. Around the planet, the moon turns for 32.9 hours. The radius of Enceladus is about 25, and the mass is 200 thousand times less than that of the Earth.

The moon has an extremely rarefied atmosphere, and under the water mantle is a solid silicate core. The surface in the north is covered with craters, in the south they are much smaller (there are unusual fissure formations – “tiger stripes”, which are sources of cryovolcanism).

Under the ice surface of Enceladus there is an ocean. The chemical composition of emissions from satellite cryovolcanoes is favorable for the inception and development of life, and inside the ocean, apparently, hydrothermal activity heats water up to 90 degrees Celsius.

Enceladus, along with Europe, the satellite of Jupiter, as well as Mars, is considered one of the most promising in terms of detecting extraterrestrial life by the celestial body in the solar system.