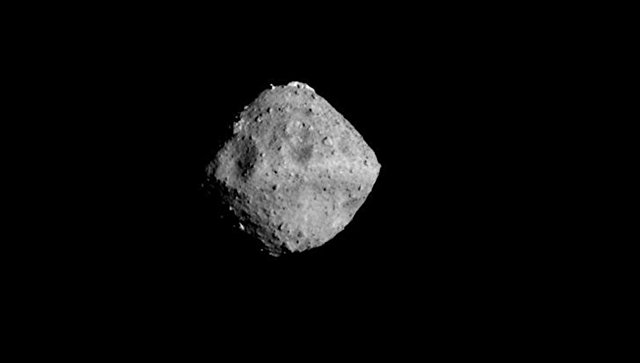 New photos of the Ryugu asteroid, obtained from a distance of 40 kilometers, indicate a strange nature of its rotation, a large number of gravitational anomalies and the existence of an unusual mountain on its equator. All this will complicate the landing of the probe “Hayabusa-2” on its surface, declare in JAXA.

“Now we know that the asteroid lies on its side – its axis of rotation is perpendicular to the orbit, on the one hand, it makes it easier for us to land, but on the other hand, we found a lot of large craters and a mountain at the equator of the asteroid that will complicate it.In addition, the force of gravity was not strictly directed downwards in all regions of Rugu, “said Yuichi Tsuda, one of the leaders of the mission.

The Japanese device reached its goal in early June and began a long procedure of inhibition and rapprochement with the asteroid. The shape of the asteroid repeatedly “changed” as the probe approached the celestial body and the image quality improved.

At first, it seemed to scientists that it looked like an ideal ball, then – to “pelmenok” or a ball of dango, the national Japanese sweets. Later series of photographs and a kind of video produced by Hayabusoy-2 in mid-June showed that it has a more angular shape and is similar to a cube of sugar or a crystal of spar.

The predecessor of the device, the probe Hayabusa, was launched into space in May 2003. This is the only spacecraft that landed and took off from the surface of the cosmic body outside the Earth-Moon system. In 2005, he landed on the asteroid Itokawa, but because of malfunctions, the taking of soil samples was not in accordance with the plan.

His heir, as JAXA experts expect, will return to Earth in late 2020, if all the procedures for the removal of soil are going according to plan, and the capsule with samples of matter will not be damaged when landing on the surface of our planet.

Ground picking, in spite of the fact that Hayabusa-2 has already reached Ryugu, will not happen soon. First, the probe must determine its exact orbit and correct it, if necessary, and then comprehensively study the structure of the earth’s interior and the relief of the asteroid.

Only after this, the interplanetary station will approach the surface of Ryugu and drop a kind of “burst” on it, which will expose and throw out the untouched material from the bowels of the asteroid. “Hayabusa-2” will collect this dust and shingle, levitating in a vacuum, during the second span above this point.

The presence of large depressions and mountains on the surface of Ryugu, according to Tsuda, has become a big surprise for scientists for several reasons. First, their presence speaks of the complex geological history of the asteroid, whose existence, as scientists previously believed, was ruled out by the theory of the formation of such bodies.

Secondly, the gravitational anomalies associated with them will significantly complicate the further rapprochement of Hayabusa-2 with Ryugu, the removal of soil and the landing of the microrover on its surface. Nevertheless, the probe’s scientific team, as its leader notes, is full of optimism and is confident that the probe will overcome all such difficulties.