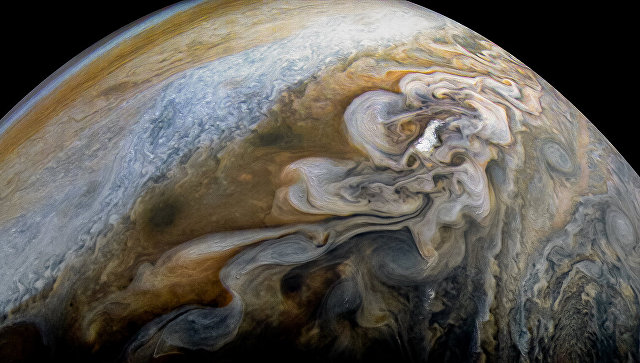 NASA’s Juno probe first tracked how the face of Jupiter’s large red spot changes, and found that the area of ​​this “eternal hurricane” is gradually shrinking, and its height, on the contrary, is increasing.

“In the astronomical archives you can find records that the Great Red Spot has increased and decreased in size in the past, now its dimensions are relatively small and it has not grown for a long time,” says Rita Bib, an astronomer from the University of New Mexico in Las -Cruces (USA).

A large red spot is believed to have been first discovered by the Italian astronomer Giovanni Cassini: his image was found in the drawings of a scientist from 1665. As planetologists later found out, it is a powerful hurricane-anticyclone whose winds move at an incredibly high speed – about 430 kilometers per hour.

The dimensions of this spot are estimated not in kilometers, but in the diameters of the Earth – it is about 1.3 times wider than our planet, and the temperature difference in its warm and cold points exceeds several hundred degrees. As astronomers believe today, the “great spot” works like a hot water bottle, pumping heat from the depths of Jupiter into its atmosphere, whose temperatures are noticeably higher than those predicted by the theory.

In the past, as Beebe notes, the size of this hurricane was much larger than today – it could contain not one but three Earths at once. Why its area is decreasing and how this process affects the behavior of the whole spot as a whole, the scientists do not yet know.

NASA astronomers have closed this knowledge gap by analyzing the data that the Juno probe collected during the last 1.5 years of operation in Jupiter’s orbit. During this time he managed to get closer to the planet and its spot more than ten times and get the first detailed scientific data on their internal structure.

By combining them with snapshots in the recent past, obtained with the Voyager and Hubble cameras, scientists were able to uncover the mysteries of the evolution of this mysterious hurricane, and to find out what distinguishes Jupiter’s great spot from his “younger brothers” on Earth.

In particular, snapshots from Juno confirmed that the area of ​​the hurricane is actually decreasing – its length and width each year are reduced by about 0.04 degrees, which is equivalent to about 48 kilometers. For comparison, the diameter of the most powerful hurricane of recent years, Sandy, was about 1500 kilometers.

According to Beebe, scientists expected that a reduction in the area would cause the wind of the Great Red Spot to move even faster, as it happens in “dying” terrestrial hurricanes. Nothing like this is happening on Jupiter – instead, the “eternal hurricane” began to grow up, covering the higher layers of the planet’s atmosphere. In addition, in recent years, the color of the hurricane has also begun to change – the spot is getting darker, changing its color from creamy to black-orange.

The reasons for all these changes remain a mystery to scientists, and it is not yet clear whether the hurricane will stabilize or it will continue to decrease in length and breadth. At the current time, astronomers do not exclude the possibility that the largest hurricane of the solar system will end in the next 5-10 years.