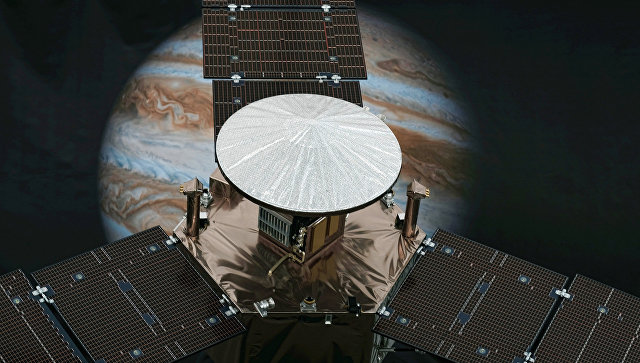 The American Juno space probe carried out the second rapprochement with Jupiter in sleep mode, the following opportunity to observe the gas giant at a short distance will be provided not earlier than December, reported NASA on Wednesday.

According to employees of a mission, Juno entered sleep mode on Tuesday night. For the reasons obscure so far the program which is responsible for work of computer system of the probe initiated its reset. As a result since a device exit to an orbit of Jupiter rapprochement of the American probe with the gas giant took place the second without scientific observations behind it.

“The device entered sleep mode, being more than at 13 o’clock flight to the closest point (the orbit) to Jupiter … The spacecraft as it should be and we work on the standard procedure of recovery (system)” — the employee of a mission Ric Nibakken told.

As explained in NASA, the probe automatically enters sleep mode if its on-board computers don’t work properly. During sleep mode all tools for conducting scientific observations are switched off.

Earlier this week reported to NASA about what postpones turning on of the engine of the probe which shall put it to lower orbit, because of malfunctions of pair of valves in traction installation of the device. It is supposed that after this transaction the probe will make flight around Jupiter not in 53,4 days as now, and in 14 days.

By calculations of NASA, the following rapprochement of the probe with the planet will take place on December 11 and according to the plan shall take place with the switched-on tools for scientific observations.

The first rapprochement of the device with Jupiter took place on December 27 was successful, and specialists continue the analysis of the obtained data.

The probe Juno flying to Jupiter long five years since August, 2011 at the beginning of July approached the giant planet and came to a stable orbit around it. The first two months after rapprochement the probe spent for decrease in an orbit and check of all scientific tools, besides the device finished shooting and transferred the first pictures at a short distance of the largest planet of the Solar system.