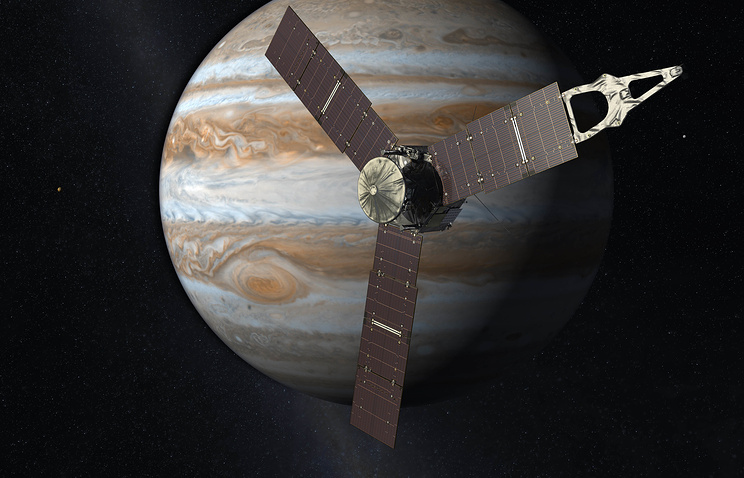 The interplanetary spacecraft Juno (Juno) on July 10 for the first time in the history of mankind will fly over the famous Great red spot of Jupiter – a giant atmospheric vortex that exists more than 350 years. This is reported by NASA.

“Mysterious Big red spot – perhaps the most famous part of Jupiter – this grandiose whirlwind rages on the largest planet of the solar system for centuries.Now, Juno and its devices, with which you can look under the clouds, will be able to” dive “closer to find out, How deeply rooted the roots of this storm.This will help us understand how it is arranged and what makes it so special, “- quoted the words of the leading researcher of the Southwest Research Institute (Southwest Research Institute) Scott Bolton.

July 4 will be exactly one year from the date of the device’s stay at Jupiter. By this time, the probe will fly over the orbit of the gas giant about 114.5 million km.

The closest to Jupiter point of the orbit for the satellite will be July 10 at 04:55 Moscow time, at this time Juno will be about 3.5 thousand km above the clouds of the planet.

After 11 minutes and 33 seconds, the device will be directly above the tops of the clouds of the famous vortex, whose length is almost 16 thousand km wide. The probe will fly over the Great red spot about 9 thousand km, at this time eight of its devices, including the camera will be included.

Apparatus Juno was launched on August 5, 2011, into the orbit of the planet itself of the solar system, it came out after five years. The probe was named after the goddess Junona – wife of the god Jupiter. The mission is designed for two years, after which the apparatus will be brought to the dense layers of the atmosphere and destroyed.

The main task of Juno is to receive and transmit to Earth information about the structure, atmosphere and magnetosphere of the planet. This, in turn, will help to learn more about the processes of formation of such gas giants as Jupiter, in the Solar and other planetary systems.