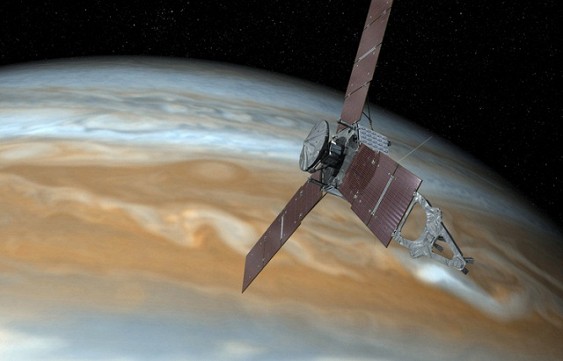 The American Juno spacecraft on December 11 for the third time most close will fly up to Jupiter and for the first time uses seven of the eight scientific instruments for a study of the major planet of Solar system.

“The probe will appear at distance in 4150 km over the cloudy surface of Jupiter when seven of its instruments are activated to collect the gravity of the giant given about a field. This information will allow scientists to understand better structure of the planet”, – is reported on the website of the National Aeronautics and Space Administration (NASA).
Flight of “Juno”

Start of the probe took place on August 5, 2011 from Florida, and it reached Jupiter on July 4, 2016. All instruments set on the probe are protected by a 180-kilogram titanic jacket from dust and the extremely strong radiation of Jupiter whose magnetic field disperses the charged particles almost to light velocity.

The main task of Juno – to receive and tell to Earth of data on structure, the atmosphere and a magnetosphere of the planet. It in turn will help to learn more about processes of formation of such gas giants as Jupiter, in Solar and other planetary systems. Floodlight – a unique body for our system, under about 21 thousand km of the helium-hydrogen gas atmosphere it is filled with the sea of liquid hydrogen at the bottom of which – metal hydrogen of 30-50 thousand km in depth. Scientists assume that in the planet there is a solid kernel. Data from Juno will help to confirm or refute this guess.

The outer jacket of Jupiter is most available to a study. Its Juno will research by means of two spectrometers: infrared which will see heat fluxes in the atmosphere at a depth up to 70 km, and ultra-violet by means of which it will be possible to note a polar light. Their study can furnish the clue to understanding of a magnetic field of Jupiter – the strong of planets of Solar system. It is the reason of formation of the most powerful radiation belts. Besides, on the device the camera removing in the visible range is mounted.

The probe “Juno” is equipped with two sensors of low-vigorous and high-vigorous particles for a study of the charged particles and plasma, and the special antenna will study radio waves which are created by a polar light. The magnetometer will map a magnetic field of Jupiter, and the microwave radiometer will help to glance in the atmosphere on depth up to 600 km.

Besides, the probe will register deviations of gravitational field of Jupiter that will allow to specify, in addition, the mass of a kernel and its composition.

The mission of Juno which cost constituted $1,1 billion is calculated for two years then the device will be removed in dense beds of Jupiter which will destroy it. Such fate is prepared to the probe to avoid danger of infection with terrestrial microorganisms of a surface of satellites of Jupiter, first of all Europe where scientists hope to find own life.
Created by request of the NASA probe set a flying range record during the work on solar batteries – its removal from the Sun exceeded 830 million kilometers. So far only eight devices got into space to Juno, however all of them used thermoelectric generators on isotopes.