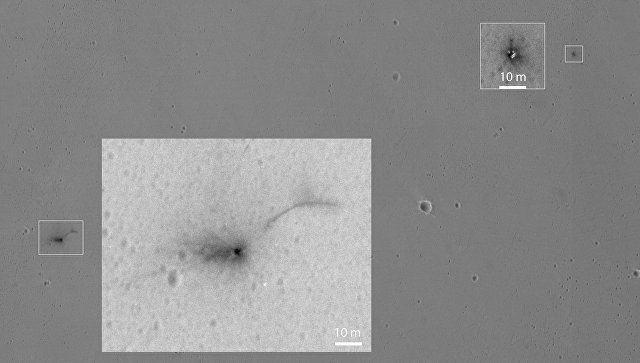 The probe MRO received new photos of the presumable place of the crash of the landing Skiaparelli module in which it is possible to see traces of explosion and fragments of the module, and also a parachute and the filter of a lender, transfers the HiRISE tool website

As Alfred McEwan noted, the head of the science team working with the HiRISE device within MRO mission, new photos of the place of fall of Skiaparelli are specified that the lender fell with a high speed, over 100 meters per second, presumably having left behind a crater with a diameter of 2,4 meters and about 50 centimeters in depth. The bright white spots surrounding a black trace of fall of a lender presumably are fragments of the module.

On Wednesday last week the joint Russian-European mission of “Ekzomars-TGO” arrived to the red planet and tried to solve two crucial problems – a probe TGO exit to a stable orbit at Mars and landing of the demostratsionny landing Skiaparelli module to the Meridian plateau at the equator of the red planet.

The first part of a mission came to the end successfully – the probe TGO came to a settlement orbit and transferred the data collected during observations of process of landing of Skiaparelli to Earth. What precisely occurred with a lender, it isn’t known yet – he successfully made the procedure of braking, dumped the thermal screen, developed parachutes then communication with it stopped.

According to the current data of the ESA, the module ceased to give life signs in 50 seconds prior to expected landing time, approximately while parachutes separate from Skiaparelli and the module turn on brake engines. They as Andrea Accomazzo, one of mission managers reported, worked only 3-4 seconds before communication loss that speaks about possible availability of these problems work.

Loss of communication with Skiaparelli and lack of unambiguous data on a module condition in the data collected by probes of Mars-Express and TGO forced the ESA to ask for the help NASA whose probe MRO has technical capability to try “to wake” a lender and to establish connection with it if it really landed. It wasn’t succeeded to make it, and after the publication of photos of the presumable place of fall of Skiaparelli of the ESA admitted the fact of its crash.