The problem of space debris out of control 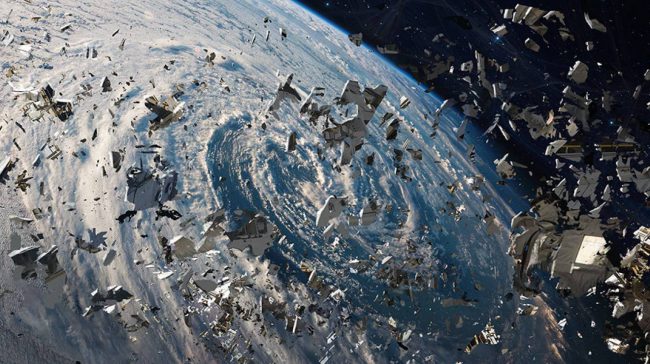 People are extremely irresponsible beings. It is not enough for them to create literally whole mountains of garbage on Earth. It is also necessary to puzzle the entire orbit of our planet in the same way. The European Space Agency said at the end of last week that, despite some progress of mankind in space exploration, there is so much accumulated debris in the orbit of our planet that it starts to get out of control. We urgently need to solve this problem now, if we want to think about future generations.

At the seventh European conference on issues related to space debris (estimate the scale, even a separate conference on this issue was created!), About 350 scientists from different parts of the world discussed ways to reduce the amount of space debris. Approximately 750,000 garbage objects larger than 1 centimeter and more than 166 million objects more than 1 millimeter have accumulated in orbit. All this trash fills the orbits of the planet, which have commercial and scientific value.

The main threat of garbage is connected with the operation of several hundred different satellites used in telecommunication, weather, navigation, broadcasting and climate monitoring projects. If something happens with these satellites, it will not only seriously impede the research projects, but also the countries themselves, which rely heavily on communication satellite technologies, will suffer seriously. And among them, by the way, not only the US, but also Russia.

Scientists are convinced that there is no longer any possibility of ignoring this problem. The risk of collision of current operating satellites with space debris is very high, and simple changes in their working orbits, as well as in case of which the launch of other satellites will not solve the problem, but rather exacerbate them even more.

“This conference shows that we are very dependent on technology. This needs to be understood by everyone, “said Holger Krag, the head of the ESA department for solving space debris problems.

“However, the implementation of countermeasures aimed at solving garbage problems still looks very difficult. Nevertheless, it is critical to arrive at some general consensus already now, especially against the backdrop of future promising projects, again involving the launch of hundreds of new satellites. ”

As Krag said, one of these projects is the plan of SpaceX private space agency Ilana Mask to create a new Internet communications network, which in the longer term will also have to help in the implementation of projects on the colonization of Mars.

As for hints on how ESA plans to deal with the problem of space debris, they did not sound at the conference again. However, it should be recalled that some private and public companies had previously offered their ideas on how to remove debris from orbit.