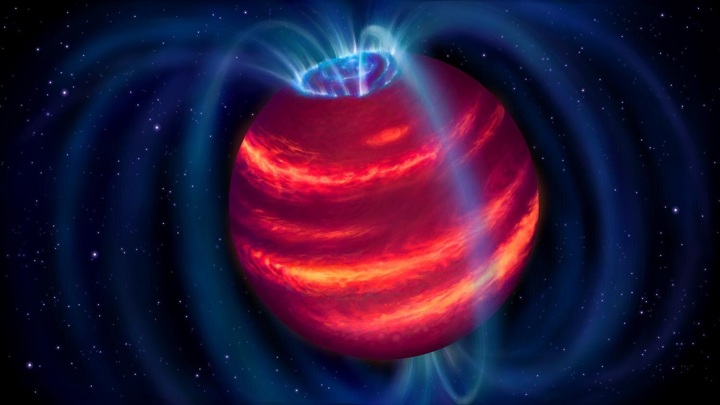 Scientists have captured a radio signal from an amazing object called a brown dwarf. Such objects are larger in size than planets, but smaller than stars. This time, such a body was first discovered thanks to its radio emission.

The discovery, described in a scientific article published in the Astrophysical Journal Letters, could be the beginning of a new era in the study of not only brown dwarfs, but also exoplanets.

Recall that brown dwarfs have masses from 13 to 80 Jupiter masses. They are too large to be considered planets, which is why they are sometimes called superplanets. On the other hand, their mass is too small for thermonuclear reactions to break out in their depths. Therefore, they do not become stars.

These borderline cases are very interesting for scientists, because they can clarify the details of the formation of both stars and planets. However, brown dwarfs are difficult to spot because they do not emit visible light.

However, while the brown dwarf is young and intensely compressed by its own gravity, it heats up and emits infrared waves into space. Brown dwarfs are usually found due to this radiation. However, at an advanced age, such an object ceases to be any bright infrared beacon.

Meanwhile, brown dwarfs also emit another type of radiation – radio waves. The point is in the powerful magnetic field of the “superplanets”, which is hundreds of times stronger than the Earth’s. Electrons trapped in it are accelerated and emit radio waves.

Astronomers have already received radio signals from several brown dwarfs. Thanks to this, scientists discovered auroras on these exotic bodies and measured the speed of rotation of these “almost stars”. However, all these observations followed the same pattern. First, the brown dwarf opened into infrared telescopes, and then radio astronomers pointed their antennas at it.

Now scientists have done the opposite.

“We asked ourselves: why point our radio telescope at cataloged brown dwarfs?” Says first author Harish Vedantham of the Netherlands Institute of Radio Astronomy. “Let’s just take a big sweep of the sky and find these objects right in the radio waves!”

Then scientists pointed infrared telescopes at it and confirmed that it is indeed a brown dwarf, located about 200 light-years from Earth.

As more such discoveries are accumulated, this approach can be used to look for brown dwarfs that are too dim for infrared instruments.

Scientists hope that in this way it will be possible to detect the radiation of giant exoplanets. After all, the same process of acceleration of electrons in a magnetic field occurs, for example, on Jupiter. It makes the giant planet a very powerful “radio station”.