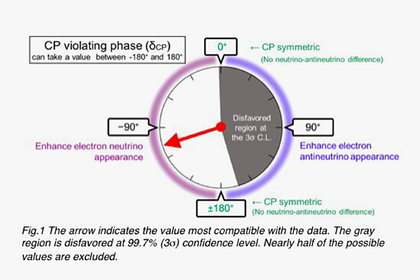 Japanese physicists have studied the cause of baryonic asymmetry – symmetry breaking between matter and antimatter, which could explain why matter exists in the Universe in general. They managed to uncover the most convincing evidence to date that the imbalance arose due to the behavior of the neutrino. An article by scientists is published in the journal Nature.

One of the necessary conditions for the predominance of matter over antimatter, which is observed in the modern Universe, is the violation of symmetry of charge-parity (CP symmetry), that is, the laws of physics do not remain unchanged for particles, which are turned into the corresponding antiparticles and are simultaneously mirrored. CP violation was observed for quarks, but the magnitude of this violation was insufficient to explain the baryon asymmetry. T2K is designed to search for CP violation in neutrino oscillations.

During T2K, a bundle of muon neutrinos and antineutrinos were generated in the J-PARC proton accelerator complex near the village of Tokai on the east coast of Japan. Particles covered 295 kilometers and were recorded by the Super-Kamiokande neutrino detector in the Kamioka mine. Moreover, their variety could change during neutrino oscillations.

The degree of symmetry breaking is determined by the parameter δ, which can take values ​​from -180 degrees to 180 degrees. If the parameter is zero or 180 degrees, then the neutrino and antineutrino will change their variety in a similar way, without violating the CP-symmetry. However, δ can enhance neutrino or antineutrino oscillations, taking values ​​of -90 degrees or 90 degrees, respectively. Researchers have corrected for increased oscillation due to the fact that the detectors are made of matter, not antimatter.

The results obtained corresponded most closely to a value of δ of -90 degrees, and to the smallest – a range from 2 to 165 degrees at the level of statistical significance of 99.7 percent, which corresponds to three sigma, or three standard deviations. At the same time, the sensitivity of the experiment is not yet sufficient to accurately determine whether CP symmetry is violated or not. This requires statistical significance corresponding to five sigma. In the future, scientists are going to upgrade the experimental facilities.