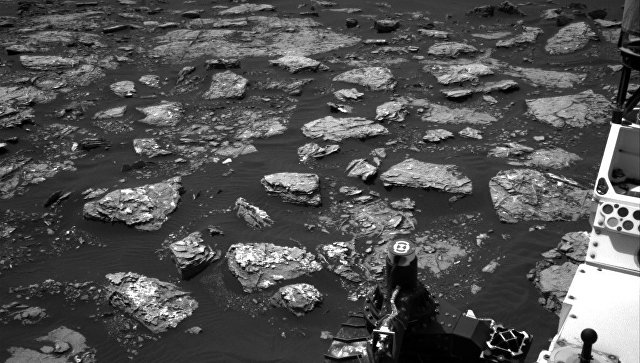 In the first day of winter the drilling rig ceased to work at “hand” of the Curiosity mars rover normally because of appearance of yet not opened problems in the drive of its drill that forced engineers of NASA to stop temporarily rover before clearing up of the reasons of breakage, the Laboratory of jet propulsion of NASA reports.

“Now we develop a test set which will help us to estimate a condition of the drive of the drilling rig. We at first will see off them on Earth, on the test copy of rover, still before we send them to Mars. Before we will carry out all these procedures on Curiosity, we made the decision to restrict mobility of rover for support of “purity” of the diagnosis. It means that the mars rover won’t move and move the hand” — Steven Lee, one of project managers of Curiosity declared.

The Curiosity mars rover works the fourth year at the surface of Mars, obtaining unique data on its past and the modern look. As Mars isn’t protected from cosmic rays by the dense atmosphere and a magnetic field, particles of high energy periodic “bombard” rover of NASA.

In extremely exceptional cases they fly by via RAM chips and a flash memory of the mars rover, periodically causing failures and forcing Curiosity to switch to the spare computer or to go to “the safe mode. It already occurred three times in February, March and in April, 2013 then engineers of a mission localized the damaged part of memory of rover and disconnected it, having returned it to working state.

In July of this year in a hand of the mars rover there was the strange failure, connected to operation of the camera MAHLI which is built in it which transferred Curiosity to “the safe mode” for several days and forced engineers of NASA to develop the new algorithm of data transfer which isn’t leading to such failures.

In the first day of winter, on December 1, there was one more failure in the pointing device Curiosity this time connected to the drilling rig which is a part of chemical laboratory SAM onboard the fourth rover of NASA.

During the next fence of a sample of breeds, the seventh for all the time of operation of Curiosity on Mars, rover transmitted to Earth a signal of failure in operation of the mechanism which shall draw out a drill drill from mars rover “hand” during drilling and retract it back after completion of this operation.

So far engineers of NASA don’t know why there was this failure, but they have two hypotheses in this respect. The first says that the drive of a drill has ceased to work because his “brakes” blocking work of transfer system weren’t up to the end disconnected, and the second says that there was a failure in electronics operating the motor drive. Both, as Li notes, it is possible to bypass and return a drill to the working condition.

Actually, this breakage isn’t fatal to the Curiosity drilling rig, and the mars rover in principle even could continue researches now if at NASA was on that desire. The matter is that the drill of rover represents the hybrid system uniting in itself lines of the performator which is “hollowing out” a hole in the studied breeds by means of a bat, and a usual drill which drills a hole by means of rotary motions of a drill.

The basic is the perforating mechanism which scientists used for studying of breeds in last six episodes of use of a drill of Curiosity. This time the scientific command of the mars rover planned to drill, but not to chisel through a sample as rover “puncher” periodically closes since February, 2015 that forces scientists to worry about his further work.

Now Curiosity is on mountain slopes Sharp, approximately in 800 meters from the place of the last parking in the town which has received the name “ridge Murray”. When problems with a drill are solved, the mars rover will continue ascension to top of this mountain and will rise to those her layers which were created when Mars became dry and cold. As scientists hope, studying of these last traces of water of Mars will help to understand as well as where it has disappeared.