The riddle of metallic hydrogen in the center of Jupiter revealed 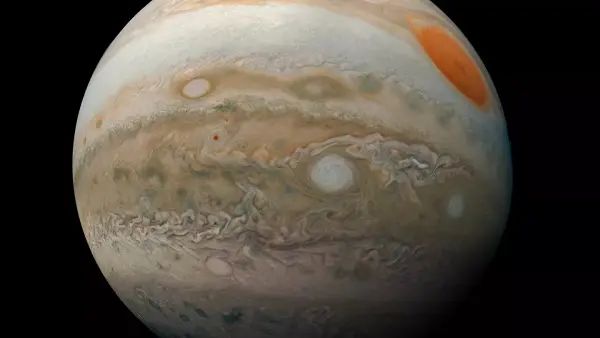 American and Swiss scientists built the first model of the processes taking place inside Jupiter, which made it possible to describe all the stages of the transition of hydrogen to the metallic state. The research results are published in the journal Nature.

Hydrogen is the simplest, one proton and one electron, and the most abundant element in the universe. It is the main component of giant planets such as Jupiter, Saturn, Uranus, and Neptune.

On the surface of these planets, hydrogen remains a molecular gas, but in the center it is in a metallic state and behaves like a conductor. This is indicated by calculations and observation results. But so far it has not been possible to construct a physicochemical model of the phase transition of gaseous hydrogen into a metal – there was not enough computing power.

Scientists from the University of Cambridge, the IBM Research Center in Zurich and the Polytechnic School of Lausanne (EPFL) have succeeded by combining machine learning, quantum mechanics and modern statistical processing techniques.

“The existence of metallic hydrogen was theoretically predicted a century ago, but we did not know how this process occurs, due to the impossibility to recreate it in the laboratory and the enormous difficulty of predicting the behavior of large hydrogen systems,” the lead author of the study quoted in a press release from the University of Cambridge , Dr. Bingqing Cheng of the Cavendish Laboratory.

As a basis for the model, exact calculations were taken for a small area of ​​the electronic structure of dense hydrogen, and the machine learning system extended them to a huge range of temperatures – from 100 to 4000 kelvin, and pressures – from 25 to 400 gigapascals.

As a result, the simulations that were run on EPFL computers took only a few weeks, compared to the hundreds of millions of years of processor time that would be required if traditional simulations were run to solve quantum mechanical problems.

The simulation results showed that the phase state of hydrogen under conditions of extreme pressure changes smoothly and gradually, and not abruptly, as is expected during a first-order transition, which is accompanied by a one-step change in all physical properties. A classic example of a first-order phase transition is the boiling of liquid water: as soon as the liquid becomes vapor, its appearance and behavior completely change, despite the fact that the temperature and pressure remain the same.

Since this transition is smooth for hydrogen, it is difficult to identify specific critical transition points. Scientists call such states systems with a latent critical point. Hydrogen transforms gradually and continuously between the molecular and atomic phases, passing from a gaseous state, first into a gaseous-liquid fluid, then into an insulating liquid, and only then into a conducting liquid metal.

The discovery theoretically substantiates the observed smooth transition between insulating and conducting layers in giant gas planets, and also explains the inconsistency of the results of many experiments with dense hydrogen.