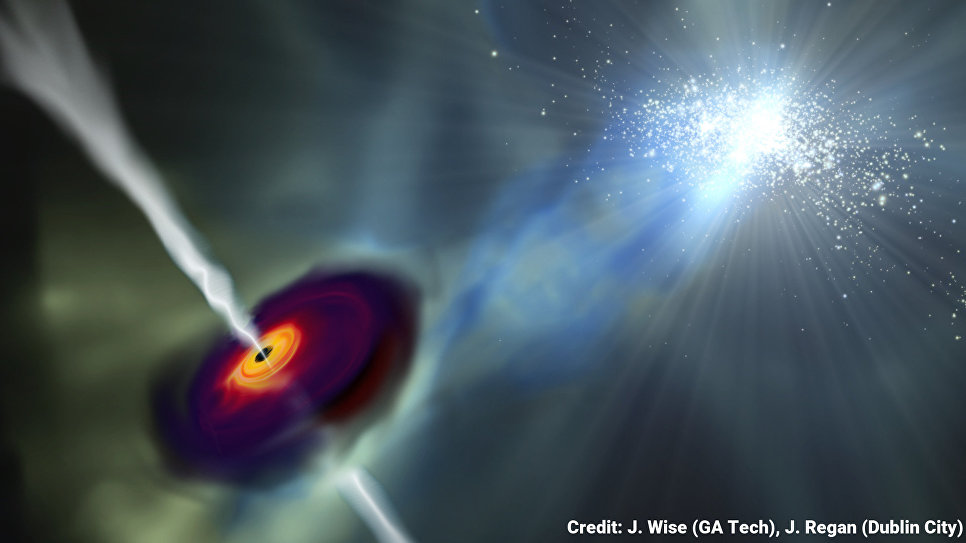 Astronomers discovered a bunch of unusual galaxies in the early universe that grew hundreds of times faster than their modern cousins, which explains the riddle of the existence of giant black holes in the first epochs after the Big Bang, according to an article published in the journal Nature.

“We were looking for a completely different thing – we were trying to find traces of star formation in those galaxies where these black holes were found, instead we managed to find four other objects right next to them, the stars formed at a” mad speed “- several hundred solar masses per year “- says Roberto Decarli (Roberto Decarli) from the Institute of Astronomy in Heidelberg (Germany).

It is believed that the center of most massive galaxies are inhabited by supermassive black holes, whose mass can range from a million to billions of solar masses. The reasons for the formation of these objects are not yet completely clear. Initially, scientists believed that such objects arose in the same way as their normal “cousins” – as a result of the gravitational collapse of stars and the subsequent fusion of several large black holes.

Observations of the first galaxies of the Universe forced astrophysicists to doubt this – it turned out that they contain black holes with a mass of tens of billions of Suns. Similar objects, as calculations show, simply would not have time to grow to such a size, if they were born small. Therefore, some scientists began to believe that supermassive black holes are born from more exotic scenarios – as a result of the collapse of giant clouds from “pure” atomic hydrogen or thanks to clumps of dark matter.

Decarley and his colleagues found a possible answer to this question by studying the most distant galaxies where these black holes were found, using the ALMA radio telescope, built on the high-mountain Chilean plateau Chakhnantor. This telescope, as explained by the authors of the article, can follow the movements of even the coldest clouds of gases, from which stars are formed, which allows using it to “directly” estimate the frequency of formation of stars.

The galaxies that Descarli and his colleagues tried to study were formed about 13 million years ago, just a few hundred million years after the Big Bang. The large distance to them and the bright light of quasars make the attempts to conduct a “census” of the stars in them significantly more difficult and to estimate the mass of “stellar building materials”, focusing on the traces of carbon in their spectrum.

For this reason, astronomers could not see the emerging stars inside the 25 galaxies that they initially observed, but they were able to follow this process in neighboring “star metropolises,” the black holes in which were not so active.

As it turned out, the stars in them form with an unbelievably high speed – each year they are born several luminaries, whose mass is several hundred times higher than that of the Sun. Similar rates of star formation and the associated influx of cold matter into galaxies, as the authors of the article show, should suffice to explain the formation of giant black holes with a mass of billions of suns in the first billion years of the life of the universe.