The Rover Curiosity has discovered a strange purple stones 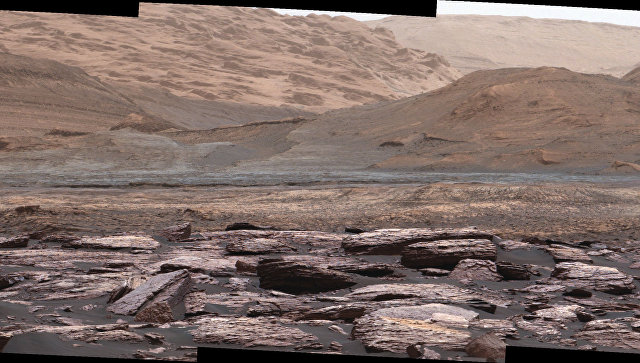 The Rover Curiosity has got the photos of unusual stones purple on the slopes of mount sharp in the Gale crater, whose chemical composition will help scientists understand how water disappeared from Mars ‘ surface.

Large variation in color implying that the slopes of mount sharp is extremely diverse in its Geology. Wind and sand brought by the wind, usually clean the rocks in this part of the slopes from soil and other solids that usually hide these colorful boulders and rocks from our view, — according to NASA.

The Curiosity Rover is the fourth year running on the surface of Mars, receiving unique information about its past and present shape. Now Curiosity is on the slopes of mount sharp, about 800 meters from the last Parking lot in the town, named the Murray ridge.

The rocks of this region researchers hope will help us solve the main mystery of the red planet – to understand how it has evolved from analogue Land in dry and cool place that is Mars today. As scientists hope that the study of lacustrine deposits, the last traces of water of Mars will help to understand how and where she disappeared.

One of the first such goals can be unusual purple stones, recently discovered by the Rover during the next stop on the way to the top of mount sharp. Such multicolor structures, as scientists believe, talking about the complex chemical processes that occurred in the last warm era in the life of Mars.

Geologists suggest, based on the results of previous chemical analyses of small patches of purple rocks in other areas of Mars that Curiosity has studied these rocks consist of hematite – rare for a red planet volcanic rocks that are common on Earth.

The photos of these stones, according to NASA, you can also see the Murray formation, large deposits of clay, which, according to the team’s plans for Curiosity, will be one of the last objects on the top of mount sharp, which will examine the fourth Rover NASA.

Now the Rover is on a temporary Parking associated with the onset of the holidays in the United States. On the third of January, scientists expect it will continue climbing to the top of the mountain in the center of Gale crater and closer to the purple stones that will be fired from the cannon ChemCam laser to study their chemical composition. Problem with brown Curiosity, appeared at the end of November, was partially resolved on 16 December, which leaves the hope that the Rover will be able not only to fire but also to touch these purple rocks.

Over the past year, as told by Lauren Edgar, a geologist of the science team of Curiosity Rover drove about three kilometers, has drilled six of the stones and took two samples of Martian matter. Due to the difficult terrain and problems with flimsy aluminum wheels, Curiosity has risen by only 85 meters to the top of mount sharp. As scientists hope this process will go faster next year, and the Rover will be able to solve our main research problem.