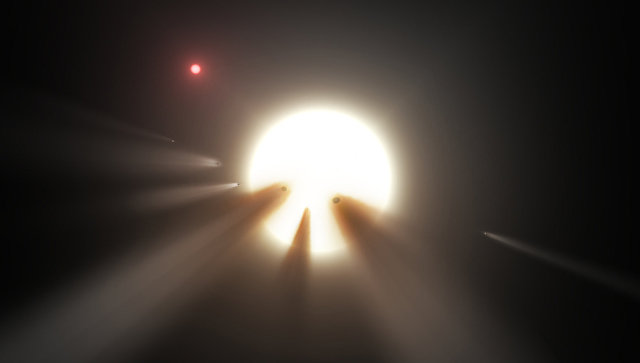 The astronomer Brian Lucky considers that uniqueness of the unusual growing dull and blinking KIC 8462852 star in the Cygnus constellation which analogs astronomers didn’t find can’t be explained with availability of an extraterrestrial civilization near it, it is told in article published in electronic library arXiv.org

In the middle of October, 2015 astronomers from Yale University told about unusual fluctuations in KIC 8462852 star brightness in the Cygnus constellation which luminescence force two times decreased almost on a quarter in the last 7 years. These “blinkings” were specified for the first time a possibility of presence in its vicinities of the so-called sphere of Dayson, the catcher of energy of a star created by the superdeveloped civilization of aliens.

Initially scientists assumed that such “blinking” of a star could be caused by a swarm of the comets which closed its light from observers on Earth however in January, 2016 the American astronomer Bradley Schaefer found out that KIC 8462852 brightness inexplicably fell to 0,16 star sizes for the last century that called into question this theory. Subsequently the scientists working with the Kepler telescope confirmed that brightness of this star falls.

Whether one this star in the Universe?

To disputes around what is represented by “a star of Tabbi” as now call this star by the name of her pioneer Tabeta Boyadzhian, Brian Lacki from Ohio university (USA), the young astronomer who gained fame for the unusual ideas about basic absence of the superdeveloped aliens (the so-called “Kardashev’s civilizations of the III type” which subordinated itself energy of the whole galaxies) joined.

Approached Lucky this problem, having reformulated a classical question which we ask ourselves, looking at space – whether we are lonely in the Universe? It delivered it as follows – what probability of detection of a star similar to KIC 8462852 and as there are a lot of similar objects and cases of their tarnishing mankind owed find if such nature of behavior of a star is explained by certain natural factors.

For the last year scientists made about ten different hypotheses which explain “blinking” and tarnishing of KIC with 8462852 different natural factors, including above-mentioned “swarms” of comets or asteroids, or other, more exotic scenarios, such as action of the brown dwarf or availability of interstellar flows of asteroids. Each of them Lucky considered separately and tried to understand how often stars meet similar behavior in our Galaxy.

His calculations and observations of over 160 thousand other stars through Kepler show that if fluctuations in brightness of KIC 8462852 have been caused by certain natural factors, then for the last hundred years astronomers had to see hundreds or even thousands of such stars, and stars had to endure huge number of such potuskneniye and shadings.

It hasn’t occurred that says that KIC 8462852, most likely, is the unique object which is incidentally found Kepler and that his behavior is hardly caused some known or imaginable processes by us. In other words, any space process described by astronomers in attempts to explain behavior of KIC 8462852 can’t happen as often as that is demanded by Lucky’s calculations.

Lucky doubts that in the neighborhood of “a star of Tabbi” Dayson’s sphere – its owners is under construction as the scientist reasons, had to master interstellar flights long ago and colonize other stars, having made their behavior similar to how KIC 8462852 “blinks”. Besides, some of periodic blinkings could be explained only with the fact that owners of this sphere periodically sorted and rebuilt it that is extremely improbable.

What other options remain? It is possible how considers Lucky that astronomers just not up to the end understand all processes happening in a subsoil of stars and attribute fluctuations in KIC 8462852 brightness ingenerated by processes of the star, to some “external” factors like a swarm of comets or aliens. If to speak about aliens, then the only possible option — a certain swarm of live “space trees” in an orbit around “a star of Tabbi” whose huge colony periodically stands her in light on the way to Earth.

Other “natural” hypothesis which doesn’t contradict such calculations – existence of any structures in the interstellar environment which are periodically standing in light KIC 8462852 on the way to Earth. Lack of other similar couples of structures and stars in the catalog of Kepler, according to the scientist, is explained by the fact that he “looks” not at the Galaxy disk where stars and small celestial bodies meet often, and on her external parts where they aren’t enough.

On the other hand, such objects – clouds of dust or fragments – have to be improbably rarefied to explain behavior of KIC 8462852. Respectively, the intrigue around “a star of Tabbi” is condensed – yet Lucky and other astronomers have no plausible explanation for behavior of this star.