The search for “Planet X” continues 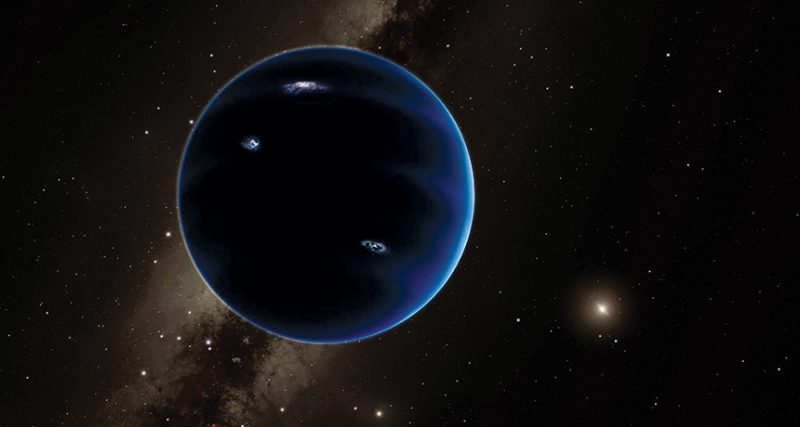 Scientists are looking for new leads that will help them in the search of a possible ninth planet (aka planet X, the existence of which scientists have categorically denied, and when to hide its existence was impossible, just received – was deprived of the title of the planet Pluto and the new planet is not associated with the same “Planet X”) on the outskirts of our Solar system in the Kuiper belt — the icy debris field beyond Neptune. New calculations suggests that estimated planet can be brighter than thought, and then it will be a little easier to find.

While indications for the existence of the ninth planet is very small, basically it is an obvious ordering of the orbits of the six most distant inhabitants of the Kuiper belt. Their oval orbits all aimed roughly in the same direction and lie approximately in one plane, assuming that on this path they drove lurking in the dark planet, five to twenty times more massive than Earth.

Planetary scientists Mike brown and Konstantin Batygin of Caltech announced the discovery of evidence in January. Now they rely on them to clarify the properties of the ninth planet and narrow the range of its possible location. Recent results of the research appeared June 20 in Astrophysical Journal Letters.

The average distance ninth planet from the Sun, most likely in the 500-600 times the distance from earth to the Sun, according to batygin and brown. Its orbit is highly elongated and inclined by 30 degrees with respect to the rest of the Solar system, which planet is much above and below the orbits of the eight known worlds. Right now, she, apparently, is the most distant from the Sun point — in the $ 250 billion kilometers in a large area of sky near the constellation Orion.

But all that scientists have learned based on the strange orbit of six frozen worlds. “The assumption that there is a planet there, do not iron, says Renu Malhotra, a planetary scientist at Arizona state University in Tucson. — I think it is worth to continue to study. There are enough reasons not to ignore this evidence. No need to get depressed if the planet is not there.

Malhotra and her colleagues sought independent evidence for the existence of the ninth planet. And I think I found another clue: the orbital periods of those six bodies are roughly synchronized with each other, said scientists in the same journal. For example, the most distant dwarf planet Sedna, orbits the Sun five times, while its neighbor 2010 GB174 completes eight orbits. Such synchronized orbits usually indicate gravitational connection between all involved bodies. But these tiny worlds too small to influence each other, says Malhotra, and therefore, must be more massive partner.

Planet 10 times more massive than Earth, orbiting the Sun approximately every 17 117 years would be in sync with four of these bodies, found Malhotra and her colleagues. Consequently, the “ninth planet” is about 100 billion kilometers from the Sun, or 665 times farther than Earth is from our sun.

Synchronized orbit “is very intriguing and very interesting,” says planetary scientist Scott Sheppard of Research of the Carnegie institution in Washington. “But we need more such facilities, to say it’s statistically significant or not.” Sheppard and Chad Trujillo of the Gemini Observatory in Hilo, Hawaii also suggested in 2014 that the orbits of a dozen worlds (including the above six) in the Kuiper belt could explain the ninth planet.

“We want to find more of these small bodies, which could lead us to a big body,” Sheppard says. He and Trujillo hunt distant objects of the Kuiper belt using telesopes in Chile and Hawaii. And not without success: added a few ice blocks in the lists. Orbit new public bodies are also arranged relative to each other and relative to the previous ten. But to prove it, we need more observation and analysis. Sheppard and Trujillo have already reserved the telescope for a few this autumn, when the constellation Orion will be visible. “We will look to more distant objects,” he says. — And maybe the planet.”

If new objects will help astronomers to determine the position of the ninth planet, they might be able to directly see her. Its cold atmosphere (below -220 Celsius) can contain only hydrogen and helium, which reflects the light. This was reported by Jonathan Forty, a planetary scientist at the University of California at Santa Cruz, in an article dated June 20 in Astrophysical Journal Letters.

“We expect that the planet, if it is there will be a kind of mirror,” says Forti. — We believe that it should be bright with a whitish hue. Its atmosphere should reflect 75% of solar light that reaches. Depending on the size, the ninth planet may be bright enough to get into the field of the Dark Energy Survey project survey of galaxies and supernovae in the southern sky.

“The problem is that we don’t know where to look,” says Forti.

Brown and Batygin think that narrowed the search area up to 2000 square degrees in the sky near Orion. “It’s not as much as you would think,” says Batygin. The telescope Subaru in Hawaii large enough to discover the ninth planet that can cover this piece in just 20 nights. “This is a big request. But the reward could be the expansion of our planetary family.”