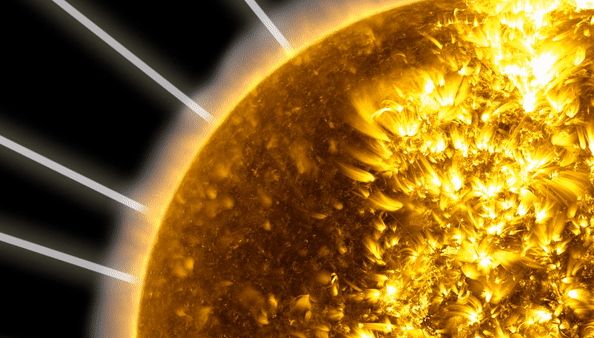 The Sun’s crown warms up to ultra-high temperatures not only due to large flares and plasma emissions, but also due to the birth of millions of nanoscale invisible to us, astronomers state in an article published in the journal Nature Astronomy.

“We were able to fix the birth of hot plasma at those points in the atmosphere of the sun where there are no spots and where the luminary remains calm.” In the future, we hope, we will be able to make longer observations and understand what proportion of the corona heating falls on such nanosplashki, write Juliana Vivering (Juliana Vievering) from the University of Minnesota in Minneapolis (USA) and her colleagues.

The sun is a ball of red-hot plasma, the upper layers of which are constantly mixed, which in combination with the high electrical conductivity of the solar plasma creates a strong magnetic field. Lines of the magnetic field often go beyond the denser layers of the Sun, and this leads to the appearance of spots and powerful coronal emissions, potentially capable of destroying civilization and all life on Earth.

The high temperature of the corona, the uppermost layer of the solar atmosphere, is still a mystery to astrophysicists. The underlying layers of the Sun, the chromosphere and the photosphere, are heated to a temperature of 6-10 thousand degrees Kelvin. In the boundary layer between the corona and the photosphere several kilometers thick, this temperature increases sharply – hundreds of thousands of times, reaching about one million degrees Kelvin.

A full explanation of this phenomenon, in whose existence scientists do not even doubt, does not exist yet. Many astronomers believe that the atmosphere of the Sun is heated up by powerful plasma outbursts and flares that periodically occur on its surface, but unequivocal evidence of this has not been found.

Vivering and her colleagues found the first “material” hints that it was not so, studying the data collected by the unique X-ray telescope FOXSI, designed to observe the activity of the Sun in the x-ray range. In fact, it is a “ground” analog of one of the tools of the Japanese orbital telescope Hitomi, which exploded in March last year.

The atmosphere of the Earth prevents such observations of the luminary and other stars, so American and Japanese scientists are forced to launch this device in its upper layers on special rockets that allow FOXSI to conduct research for several tens of minutes before the telescope begins to return to the atmosphere .

These short observations, as Vivering tells us, were enough to understand in which regions of the sun there are outbursts of hard X-rays that indicate the beginning of the warming up of its crown, and compare them with the location of large flares, followed by the satellites of ESA and NASA.

As it turned out, most of the foci of the most high-energy X-ray bursts were not in the vicinity of sunspots and recent outcrops of coronal matter, but in “quiet” regions of the sun, which do not show visible activity. As scientists suppose, in these corners of the Sun there are original nanospyshki, invisible to our eyes and instruments of probes, but at the same time warming up the crown to a temperature of tens of millions of degrees Kelvin.
Meanwhile, the stains themselves produce much less rigid X-rays than quiet regions of the Sun, that is, they quite weakly warm up the crown of the star. All this, according to the researchers, indicates that nanospisks, and not the powerful outbursts of coronal matter, are the main mechanism for heating the solar atmosphere.

Interestingly, a similar idea has already been presented by Russian astrophysicists who studied data on weak flares collected using the first Russian solar probe “Coronas-Photon.” They found that a large number of these flashbulbs are enough to fully explain the anomalously high temperatures of the solar corona even if large flares do not occur at all.