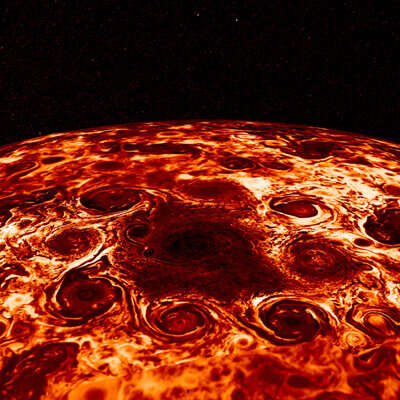 Scientists have long known that in the vicinity of Jupiter’s south pole, atmospheric vortices form mysterious structures resembling regular polygons. In a new study, astronomers have tried to understand the reason for this unusual behavior of vortices on Jupiter, as well as other giant planets.

On both Earth and Jupiter, atmospheric vortices form in the vicinity of the planet’s equator and then begin to move towards the poles. However, on Earth, vortices usually dissipate when passing over land areas, while on Jupiter – which has no solid surface at all – atmospheric vortices reach the poles unhindered and, for unknown reasons, cluster in the form of regular pentagons or hexagons.

In the new work, scientists led by Cheng Li were able to find the reason for such unusual behavior of Jupiter’s atmospheric vortices using a mathematical model built by Lord Kelvin, a British physicist and mathematician, about 150 years ago. This model was constructed by Kelvin to describe the results of early experiments carried out in 1878 by the American physicist Alfred Mayer, who placed floating ring magnets in water and observed their spontaneous orientation in the form of regular polygons.

According to Lee’s team, the idea of ​​applying the Kelvin model to vortex motions in the atmosphere of Jupiter and other giant planets has never featured in the scientific literature before. The calculations carried out by the researchers using this model showed that on Jupiter, each atmospheric vortex that is part of the polygon is surrounded by an envelope rotating in the opposite direction and representing an analogue of the Earth’s anticyclone. The presence of such shells ensures the mutual repulsion of the vortices; in its absence, their merger is observed, the authors explained.

The work was published in the journal Proceedings of the National Academy of Sciences.