The slow growth of sunspots proved to be a mystery 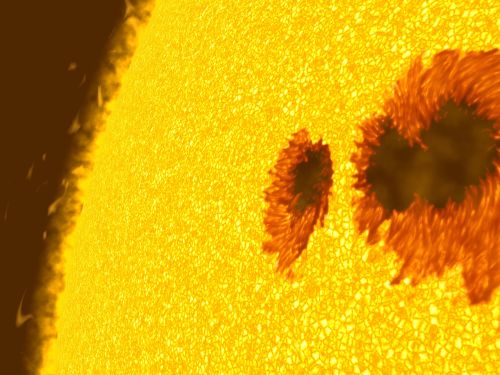 High solar activity – “units” of magnetism, visible to us as dark spots. They occur in areas of upward force lines of magnetic fields that entrain a mass of colder plasma. Recent studies have shown that this movement is relatively slow: the speed of only 150 m/s. the Message about this work published in the journal Science Advances.

Aaron Burch (Aaron Birch) and his colleagues from Germany, UAE, USA and Japan have studied the behavior of the magnetic field of the Sun tool HMI operating on Board the space Observatory SDO. He continues to accumulate data on magnetic activity in stars without interruption since the launch in 2010, Parallel to the HMI captures the solar disk in high resolution in the visible range, allowing to study the horizontal motion of the plasma.

At the same time the same processes were simulated on the computer: it was shown that the faster the rise of the plasma to the surface, the more manifest the horizontal currents that diverge from the exit point in all directions. However, comparing the indications of the model with the observations, astronomers found that the real fast rises are not happening and updrafts are unable to recruit more than 150 m/s (based on the depth of 20 thousand km). Existing theoretical models say at least about 500 m/s and, according to Aaron birch and his co-authors, need to be revised.