The solar system could have been born within a giant star 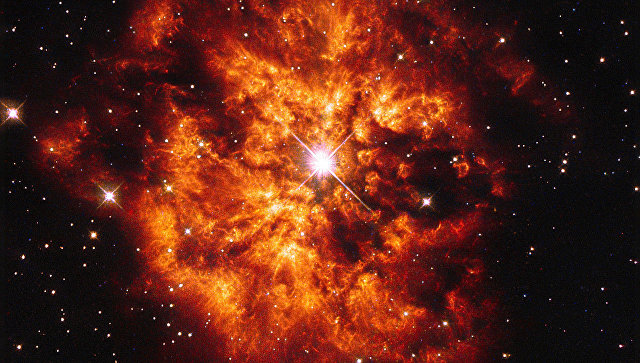 The matter of the future Solar system could not be born in the depths of the supernova, but in the so-called Wolf-Rayet star – an extremely unstable, hot and large light surrounded by a “cocoon” of gas and dust.

“The primary matter of the solar system contains a large amount of aluminum-26 and almost no iron-60. Supernovae produce both isotopes in large quantities, which makes us wonder why one of them got into the matter of the Sun and the planets, and the other there is very little” , – says Vikram Dwarkadas (Vikram Dwarkadas) from the University of Chicago (USA).

Today virtually all planetologists believe that the Sun, the Earth and other “inhabitants” of the Solar System arose within a small gas-dust nebula, traces of which can be found in the oldest asteroids-chondrites and comets. On the other hand, the question of how this cloud arose remains the subject of fierce debate among astronomers.

The matter is that the primary matter of the solar system possessed an extremely unusual chemical and isotopic composition, unlike matter, which is supposedly produced by its main progenitors-supernova explosions. For example, it contained about 17 times more aluminum-26, a light isotope of this metal than the average for the Galaxy, and the proportion of heavy iron-60, on the contrary, was anomalously low.

As Dvarkadas notes, astronomers are now trying to explain these discrepancies by unlikely and extremely exotic scenarios of how supernova matter could accumulate at the birthplace of the solar system, while “losing” iron-60. According to him, you can get rid of all these complexities and conventions if you change the “parent” of its matter to a very unusual class of stars, the so-called Wolf-Rayet stars, whose mass exceeds solar radiation by 40-50 times.

In our Galaxy and its satellites there are several thousands of similar stars, in the bowels of which there is such a violent activity that they throw out huge amounts of matter in the form of a solar wind. This matter forms a kind of “shaggy” gas mantle around the star, which has a special effect on their radiation spectrum and other properties of these stars.

Inside this “shaggy” mantle, as calculations of Dvarkadas and his colleagues show, a kind of bubble of gas and dust will appear, representing a region of comparative emptiness surrounded by a dense shell of gas and dust. The walls of this bubble, according to planetologists, will “slow down” the movement of relatively heavy dust particles, including aluminum-26 atoms, which is produced in large quantities in the outer shells of the Wolf-Rayet stars.

In 5-6 million years, when the giant star ends its short life in the form of a powerful supernova explosion, the matter of this “bubble” is partially scattered around the neighborhood and turns into a dense cloud of gas and dust, inside which new smaller stars can be born .

Similarly, according to Dvarkadas and his colleagues, the Sun was born and another one-sixth of all other stars in the Galaxy. In favor of this is the fact that many of the “germs” of stars known today to astronomers are located a short distance from the known remains of large white and blue giants, as well as inside the “bubbles of gas” left by the dead lights.