The Solar system is approaching a “death star” 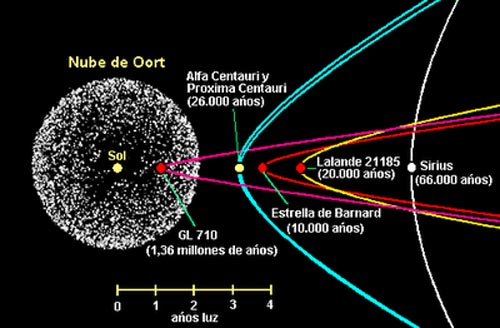 Gliese 710 will be not only the brightest but also the most dangerous star in earth’s sky. The star Gliese 710 is now in 64 light years from Earth, but in a million years will pass very close to the Sun right through the Oort cloud, contain many large comets and ice rich asteroids. Their orbits would be seriously outraged and a significant part must eventually collide with the Earth.

Gliese 710 is an orange dwarf of spectral type K7. By weight it is half the size of the Sun, and a luminosity inferior to him 30 times. When observing this object, astronomers had noticed that he had very little self movement — the position of the stars in the sky changes very little, while there are signs that it is moving closer to the Earth.

Russian astronomers in 1996 found that as a result of this rapprochement between the Sun and Gliese 710 will be closest to each other stars — will converge to 260 000 astronomical units or four light-years. It is approximately equal to the distance to the next nearest planetary system — Proxima Centauri. The same group of scientists suggested that part of the orbit of the comets of the Oort cloud (up to 1,5—2,0 light years from Earth) can be outraged by this convergence, with the result that the comet may even fall on our planet.

However, over the last 20 years in the astronomical technique of outside of our country there have been great changes — there was a powerful space-based telescopes (in Russia these are used exclusively for military purposes — for Earth observations). Using data from the latest among them, the European Gaia, the Polish astronomers analyzed the motion parameters of Gliese 710 in the direction of the Solar system and significantly said them. As it turned out, using 1.35 million years it will be held at 6 250 astronomical units from our star (with a probability 90 percent). It is less than 0.1 light years and much less than given all the previous scores. For comparison, the average removal ninth planet from the Sun is only 10 times less than from Gliese 710. Therefore, in the earthly sky, it is brighter than any other star, and only slightly inferior to Venus.

More importantly, from this figure it follows that the star will definitely hit your gravity on the stability of the Oort cloud and much stronger than previously thought. In General, convergence with other stars to the Solar system — common, and occur every 100 000 years. But it all depends on distance. Star 4.00 and 0.1 light years from the object affects him with a force different 1 600 times. Accordingly, this passage will affect the body of the Solar system is stronger than than most other approaches.

During the million years after the approach of Gliese 710 comets from the cloud can strike the Ground. Believed to be 55 million years ago, a comet hit this kind was enough to radically and permanently change the climate of the planet. In the Oort cloud must be large and rich ice asteroids. Therefore strikes can bring more serious consequences — up to those that took place 66 million years ago.

anyone leaast someone got accurate math than some fool who sham about nibur and its not nibur or planet 9…this is the real deal..my question is who will ifluence more in gravity to orbit wich the sun or alpha centaur…we not going be alived by then to find out…its hard guess of depends who will capture this star alpha or the sun…since alpah already have antother companion….hope the sun gets it first or else proxima will be kick out to due to g710 star orbit the other 2 stars