The source of mysterious “radio signals of aliens” is localized 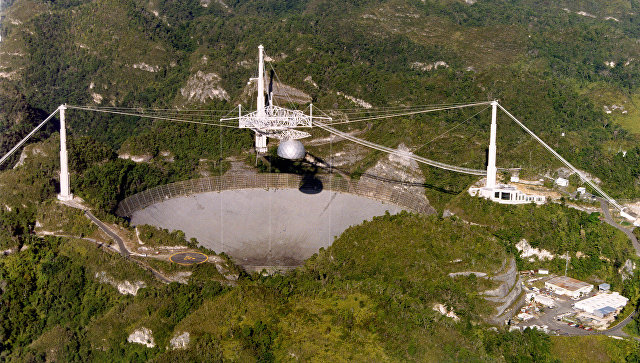 The unusual repeating radio flashes in the Charioteer which some scientists consider signals of an alien origin arise not in the Milky Way, and in a galaxy in several hundred millions of light years from Earth.

“Even without knowing, than all of them are, opening of a source is actual jump in disclosure of the nature and an origin of FRB flashes forward. Hunting behind similar radio-splashes continues” — the astronomer Heino Falcke from university of Nijmegen commented on opening (Netherlands).

For the first time (fast radio-burst, FRB) astronomers started talking about existence of mysterious flashes of a radio emission in 2007 when they were incidentally opened during overseeing by radio pulsars by means of the telescope Parks (Australia).

In the next years scientists managed to find traces of nine more similar splashes which comparison showed that they can carry a simulated origin and even potentially to be signals of extraterrestrial civilizations because of inexplicable frequency in their structure.

In the spring of this year scientists found out that the elliptic galaxy located in 6 billion light years from the Milky Way that forced them to conclude that similar splashes are born during merge of the neutron stars or other compact objects turning into a black hole was a source of one of such FRB flashes. Further astrophysicists found out that FRB flashes repeat, thereby having called these theories into question.

Paul Scholz from university of McGill (Canada) and his colleagues who opened these repeating “signals of aliens” could localize their source, watching new FRB flashes in that point from where the splash in FRB 121102 opened on observatory Parks in 2012 came to Earth.

As Sholts explains, the majority of FRB splashes was opened by telescopes which “look” at very wide part of the night sky because of what it is extremely difficult to define their precise situation even in the presence of the repeating signal.

For this reason Sholts and his colleagues watched FRB 121102 by means of the most powerful 300-meter telescope of Aresibo in Puerto Rico and an interferometer of VLA allowing to define the provision of a source to within the tenth fraction of a second of an arch.

Astronomers had only 83 hours on observations through VLA, but they broke them cunning for six months, watching that point from where presumably FRB 121102 came. Thanks to it they managed to record nine splashes, coming from the same point and the bound to FRB 121102 at once.

It turned out that this signal comes from the Charioteer, from a point near which several large galaxies and star clusters in our Galaxy are located. But the source of flashes is in other object – in the dim galaxy invisible to us in optical band, remote from Earth at least on 140 million light years. As showed overseeing to it by means of microwave telescopes, stars in it are almost not formed, and the galaxy has extremely small sizes.

Further overseeing by this galaxy showed that it constantly radiates in a radio-frequency range, periodically breaking out and generating the flashes similar to FRB 121102. Their source is a certain compact object in the center of this galaxy whose characteristics of radiation actually exclude an opportunity that it was ingenerated by certain objects of the Milky Way.

The nature of this radiation still remains unclear – dot character of its source speaks well for the fact that such flashes generate black holes, however lack of a X-ray radiation in that point of FRB 121102 speaks against this idea. Similarly, FRB flashes cannot be generated by oddments supernew because of distinctions in their ranges.

As astronomers assume, “radio signals of aliens” can result from interaction of a neutron star and a superlarge black hole around which it rotates. On the other hand, lack of frequency in FRB flashes calls into question and this idea. Therefore as scientific, further overseeing by a core of a galaxy and a source of FRB 121102, and also other flashes of this kind hopes, will help to understand how they are born also who or what sends them to Earth.