The star devours its own ruined planets and winks 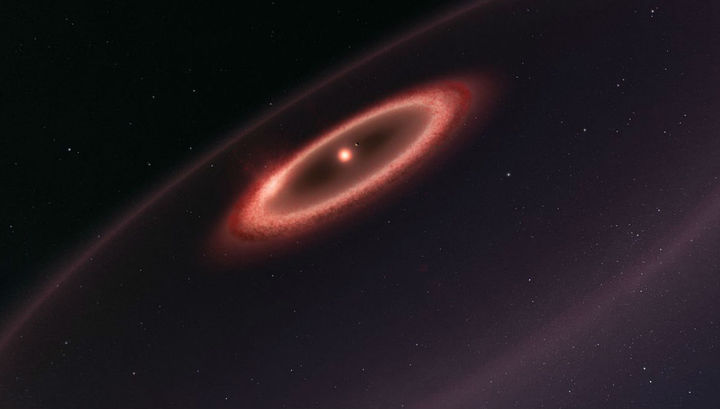 The RZ Piscium star, located about 550 light-years from the Earth in the constellation of Pisces, is known for its strange variability. It has unpredictable “blackouts” when the apparent brightness of the star falls tenfold. This weakening can last up to two terrestrial days.

Another strange light: it emits as much as 8% of its energy in the infrared range. Therefore, astronomers believe that it is surrounded by a dense cloud of dust. Dust absorbs visible light and re-emits it as infrared radiation. Some processes that occur in a dust cloud can also explain unusual changes in brightness.

Where, then, will so much dust gather around a good luminary? There are two options. First, it can be a newborn star. It “just” emerged from a cloud of dust and gas, which has not yet at least partially become planets, and partially dissipated.

Secondly, everything can be quite the opposite. The star is not young, but old, dying. Namely the red giant. Swelling, the luminary turns into dust its own planets. By the way, in five billion years such a fate awaits the Earth.

A scientific group led by Kristina Punzi of the Rochester Institute of Technology published an article in the Astronomical Journal that described new observations of a strange luminary and built its own model of what was happening to it.

As explained in the press release of the study, astronomers studied the star with the X-ray orbital observatory XMM-Newton and found that the X-ray flux from it is a thousand times greater than from the Sun. This is a clear sign that the star is young. That is, the version with the red giant can be sent to the trash.

So, all the same, the dust from the protozoic cloud? It was not there. Observations in optical telescopes from the Earth made it possible to estimate the amount of lithium in the substance around the RZ Piscium. This element enters into nuclear reactions and disappears with the life of the star. Therefore, the amount of lithium is for the luminary “a mark in the passport”, speaking of his age.

The authors calculated that the star is 30-50 million years old. Yes, she is young, but not an infant. The cloud of the primary substance had to be dissipated in the first few million years.


It seems that in the RZ Piscium system there are still ruined planets. They should be the source of this amount of dust. The gravity of the star causes a complex “bubbling” in this dust mass. A careful analysis of the observations speaks of streams of light gas flowing away from the star, and of falling clouds of dust on it. The star actually eats its own ruined planets. Another such meal, when the luminary is shrouded in a cloud of thickened dust, and causes a “blackout.”

But what power could destroy entire planets? Of course, gravity. The authors calculated that most of the fragments and dust are located at a distance of 50 million kilometers from the star. This is three times less than the distance from the Earth to the Sun. The planet that appeared here could be destroyed by tidal forces.

But, if a star destroys a planet at such a distance from itself, how could a planet form there? No way. In such proximity from her native light, she could have been in trouble for herself after birth.

Any planetary system is a very complex organism. The motion of each planet is affected by the gravity of all of its “sisters”. Any cataclysms and unpredictable events are possible here. Calm, predictable, repetitive running of the planets of the Solar System in orbits is a consequence of the fact that the Sun’s family is almost five billion years old, and it has already found its “equilibrium point”. But in her turbulent youth, there were migrations of planets almost through the whole system, and collisions. By the way, the recent (by astronomical measures) collision of large planets is another possible source of dust.

The RZ Piscium system, as it turned out, is young. Before our eyes processes are taking place, in our own planetary system, long-established history. This is a unique opportunity to look into the potter’s workshop of nature and see how the gods burn their pots.