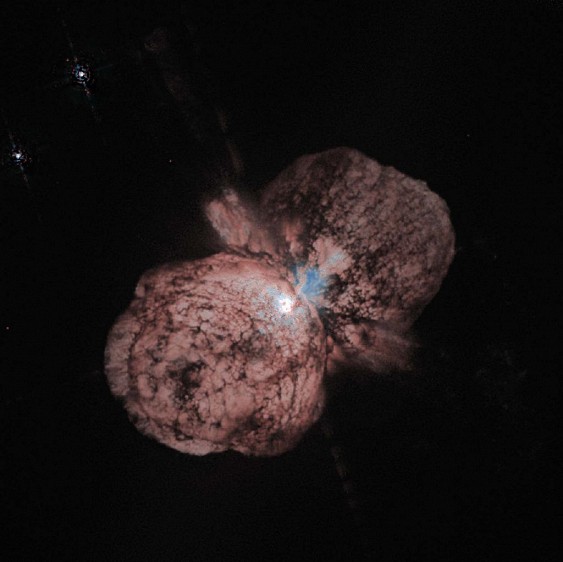 The famous star ETA Carinae, which during the outbreak in 1843 became the second brightest star in the night sky (after Sirius), possibly repeatedly flashed before, scientists say.

ETA Carinae is a double star-a hypergiant in the constellation Carina, with a total luminosity component, more than 5 million times greater than solar. It is removed from the Earth at a distance of 7500 light years. Flushing suddenly, in 1843, the star became the second brightest star in the night sky after Sirius. This event was called the Great flash. After 1900 on the outbreak site was discovered nebula, the Homunculus. Star, since 1940, again gradually increases the brightness. By 2014, it reached magnitude 4.5 m. Astronomers for over a hundred years of watching This Keel, trying to understand her strange behavior.

In the new study, a team of scientists from the United States tried to shed light on the unusual properties of this star system. By studying the data of observations with the Hubble telescope during the period from 1993 to 2014, they built a map of the distribution of velocities of gas fibers on the periphery of the nebula, the Homunculus. It turned out that the nebula is expanding at the speed of 1000 km/s. But even more interesting result was that the rate of expansion of the nebula is the same in all directions.

To ensure that the gas moved smoothly without losing speed, you need to surround the Homunculus have been practically free from the interstellar medium. In order to explain this fact, the authors suggested that the explosion of 1943 was not the only one in the system. Most likely, ETA Carinae flared up once or twice, – scientists say. Most likely, in the opinion of the authors moments of flashes, it is 1250 and 1550. Earlier there was a version that the Great flash could happen because of the collision of the main star system ETA Carinae with a hypothetical third stellar component.