The Star of Fomalhaut is the cosmic “eye of Sauron” 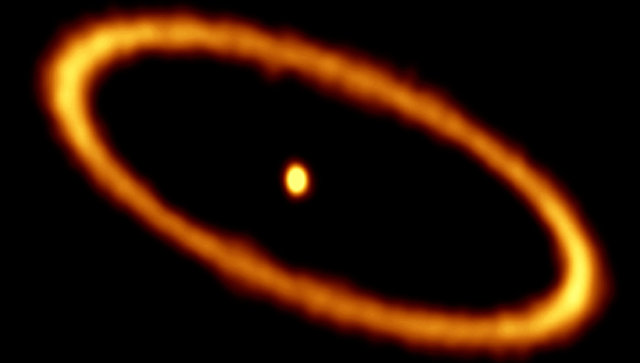 The ALMA Microwave Observatory received the clearest photos to date of “Sauron’s Eye” – the star of Fomalhaut, surrounded by a “burning” ring of dust and gas, which arose as a result of a collision of comets and asteroids, the European Southern Observatory reports.

Fomalhaut belongs to the number of relatively young and bright stars in the southern hemisphere, located relatively close to the Earth. This star is 25 light-years away from us, and by its dimensions it is much larger than the Sun. So, its mass is 2.3 solar, diameter – 1.9 of the diameter of the Sun. It is approximately 18 times brighter than the Sun and hotter than 3,000 degrees Kelvin.

In 2008, a group of astronomers led by Paul Kalas from the University of California at Berkeley (USA) announced the discovery of a giant planet in a gas-dust disk surrounding Fomalhaut. The conclusions of Kalas and his colleagues were criticized, and by 2011 several new studies appeared in peer-reviewed scientific journals, whose authors could not find signs of the existence of Fomalhaut b.

Images from the Hubble and other telescopes received in 2012, disproved this view and “resurrected” the planet, which recently received its “official” name. It was named “Dagon” in honor of the Akkadian deity associated with navigation and agriculture, as well as the main prototype for Cthulhu from the stories of Howard Lovecraft.

New images obtained by the ALMA telescope, the most powerful microwave observatory of the Earth, confirm the existence of this planet. Such an “eye of Sauron,” as scientists explain, can arise in the stellar system only if it has a large planet that drives the debris of comets and asteroids into a narrow area of ​​orbits and causes them to collide.

The study of this cosmic “eye,” as scientists hope, will shed light on the history of the formation of Dagon and help us understand how often “twins” of the Earth and other planets arise.