The star of Kepler 11145123 was the most round natural object 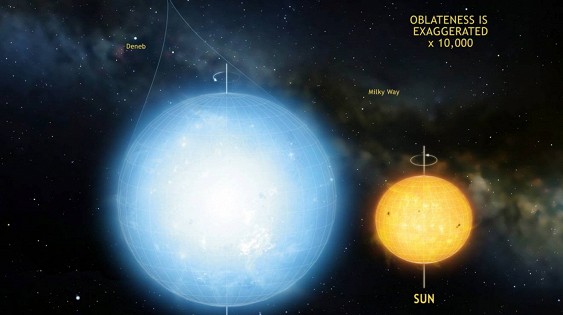 Stars – spheres not equal, a number of mechanisms can lead to violation of their correct form. For example, rotation forces them to be flattened in the direction of poles and to extend in the equatorial plane, being slightly inflated as huge plasma pumpkin. Centrifugal forces are so shown, and the quicker the star rotates round its pivot-center, the stronger it “is usually flattened”. Our Sun, for example, makes a revolution approximately in 27 days and 10 km more widely at the equator, than in the plane of poles. At Earth this difference reaches 21 km.

Kepler 11145123 star located in 5 thousand light years from us is approximately twice larger and brighter than the Sun and rotates three times more slowly. The German scientists have made astroseismological observations of the pulsing range of this big star. In article which Laurent Gizon and his coauthors have published in the Science Advances magazine they report that the difference between the equatorial and polar radiuses of Kepler 11145123 makes only 3 km – besides that on average its radius reaches 1,5 million km. “It does Kepler 11145123 by the most round known natural object, – Gizon heading Institute of researches of Solar system of Society of Max Planck adds. – Even krugly Sun”.

By means of the Kepler space telescope scientists watched little periodic changes of luminosity of a star within more than four years. According to them, she was even more ideally round, than it follows from the slowest rotation of Kepler 11145123. Gizon and his coauthors assume that to even more spherical the star is done by the weak magnetic fields operating in low latitudes.