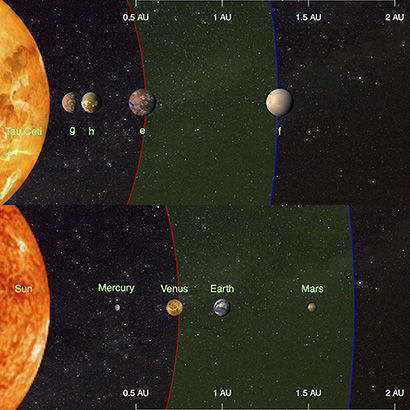 A new study conducted by an international team of astronomers led by Fabo Feng from the University of Hertfordshire, United Kingdom, found that in orbit around the sun-like star of Tau Ceti, located just 12 light-years away from us and visible in The sky with the naked eye, there are four planets the size of the Earth. The masses of these planets are not more than 1.7 times the mass of the Earth, which puts them on the first lines in the list of planets of the smallest size ever found in orbit around a nearby sunlike star. Two of these planets are super-earths located in the inhabited zone of the star, that is, water in the liquid form may be present on the surface of these planets.

These planets were discovered by Feng’s team with detailed observations of the thin displacements of Tau Ceti’s star. This required a method of measuring the sensitivity offsets at a level of at least 30 centimeters per second.

The two outer planets of the Tau Ceti system are probably candidates for potentially inhabited planets, although a massive fragmentation disk reduces the likelihood of their habitability due to possible frequent bombardment of the planet’s surfaces by asteroids and comets.

Earlier, in 2013, the same scientific team tried to discover the planets around Tau Ceti, but at that time their attempts failed to produce a convincing result because it was impossible to distinguish weak signals from the “noise” associated with the activity of the star’s surface. Since 2013, the team has significantly improved the methods used and was able to eliminate two false detections with the help of advanced techniques and identify four previously undetected signals, the verification of which showed that the signals are related to the planets.