The star of the alien became even more mysterious 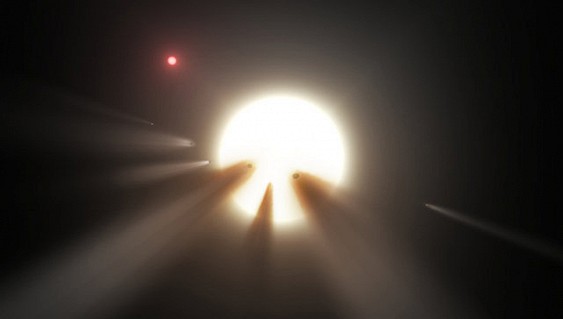 Russian-American astronomers found a new strange behavior of the stars KIC 8462852 whose periodic blinking and unexplained drop in brightness was somehow connected with some invisible entities or objects in its orbit.

In mid-October 2015, astronomers from Yale University spoke about unusual fluctuations in the brightness of the star KIC 8462852 in the constellation of Cygnus, the strength of the glow which had twice been reduced by almost a quarter in the last 7 years. These blinking for the first time pointed to the possibility of the presence in its vicinity of the so-called Dyson sphere, trap the energy of the stars created evolved civilization of aliens.

Initially, scientists assumed that such a blinking star could be caused by a swarm of comets closed it the light from observers on Earth, but in January 2016 the American astronomer Bradley Schaefer found that the brightness of KIC 8462852 inexplicably fell by 0.16 magnitudes over the last century that questioned this theory. Subsequently, scientists working with the Kepler telescope, confirmed that the brightness of the star drops.

Valery Makarov from the Observatory of the Navy in Washington and Alex Goldin of the company Teza Technology in Chicago (USA) found new oddities in the blink of this star. They found that her glow dims periodically for 1-7% every part day, and tarnishing found to be associated with the presence of certain objects in its orbit, which we do not see.

Similar findings were made by scientists with the new method of analysis of data that the Kepler telescope collected during the first phase of its work when he looked over the thousands of stars in the constellation Cygnus and Lyra, and KIC 8462852.

As other scientists tried to solve the mystery of Tuscania KIC 8462852 according to Kepler, Goldin and Makarov had to face the fact that the received images are processed in such a way that they are not suitable for finding long-term oscillations in the brightness of the star.

For this reason, scientists had to develop a new method of raw data processing, which incorporates statistical methods that are used in astronomy, paleontology and biology to find similarities and akin in anatomy of different creatures. In addition to fluctuations in the strength of the glow KIC 8462852, Makarov and Goldin besides followed-up did not change the position of the stars relative to other objects as time progresses.

This analysis showed that the brightness of KIC 8462852 really sharply fell at least twice during the observations, it was found that the strength of the glow of this star of aliens is constantly changing for 1-7% every 20 hours, which scientists have recorded for over 15 months of observations.

The most surprising is that these fluctuations in brightness were associated with some shifts in position of the star on the matrix of Kepler, which can simultaneously indicate several things.

The second hypothesis, as the researchers note, is hardly true – if next to KIC 8462852 was another star, it should have been detected by Kepler or other telescopes in that case, if it was caused by the changes of the force that was discovered by Goldini and Makarov.

Accordingly, we have two versions – or star Tabby obstruct any comet or planetoid in orbit, and not in orbit of this star, and some other lights, closer to us, or to blame some object non-natural origin have the most KIC 8462852. Themselves Goldin and Makarov in favour of the first option, indicating that such a swarm of comets must have a sufficiently small size and mass, if the star around which they orbit close to the Sun.