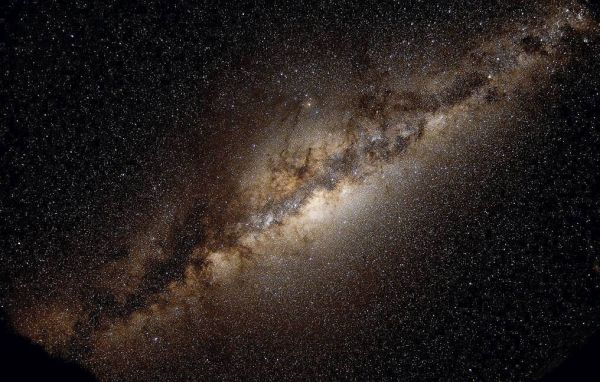 A study of the structure of hot clouds of gas around the Milky Way showed that the immediate vicinity of our Galaxy has an unexpectedly colorful appearance, which reflects 10 billion years of its history. In particular, scientists have found that the sources of X-ray radiation are located in these clouds rather unevenly. An article describing the study was published in the scientific journal Nature Astronomy.

“We expected that these accumulations of gas would be more uniform. However, it turned out that the Milky Way and other galaxies are not closed systems at all. They constantly interact with the intergalactic matter surrounding them, throwing out their matter there and taking some of the gas back,” said one of the the authors of the article, Professor of the University of Iowa (USA) Philip Kaaret.

All galaxies in the Universe are surrounded by the so-called intergalactic environment. It contains a very rarefied gas mixture, which consists mainly of hydrogen with a small amount of helium. Scientists believe that this cold matter, which is concentrated along the invisible filaments of the universal “web” of dark matter, serves as the main source of hydrogen and helium, which is needed to form new stars in active galaxies.

Gases from the intergalactic medium constantly interact with matter that is ejected from galaxies as a result of supernova explosions, as well as the activity of supermassive black holes. Scientists believe that the further evolution of galaxies depends on the nature of their mixing and movement.

Observations show that in about half of the galaxies close to us, ejections of black holes and supernovae have almost completely suppressed the formation of stars. Astronomers suggest that this is due to both the fact that the reserves of cold gas and dust inside them are warming up, as well as the fact that their emissions prevent the matter of the intergalactic medium to “fall” on galaxies and replenish the stocks of stellar “building materials”.

Invisible outskirts of the Galaxy

For the first time, Professor Kaaret and his colleagues studied the properties of this hot gas in detail. To do this, they used the HaloSat microsatellite, which was created at the University of Iowa to study the so-called galactic corona. This is what scientists call the clusters of very rarefied and hot gas in the intergalactic medium that surround the outer edges of galaxies, in this case the Milky Way.

Astrophysicists are interested in the galactic corona of the Milky Way for several reasons at once: for example, because they can hide a significant part of the matter, which is gravitationally connected with our Galaxy. It remains virtually invisible to astronomical instruments. The fact is that it is very strongly ionized and almost completely transmits light rays and many other forms of radiation through itself, with the help of which astronomers can observe space objects.

Kaaret and his team tried to estimate its size, structure, and mass. To do this, they observed how much X-rays are generated by highly ionized oxygen atoms in such gas clusters. The scientists were helped in this by the HaloSat orbital probe, which over the past two years has tracked similar flares across the entire area of ​​the night sky.

On the one hand, these observations confirmed that our galaxy is surrounded by a disk-shaped cluster of gas. On the other hand, it unexpectedly turned out that the X-ray sources associated with the clouds of hot gas were unevenly distributed throughout the interstellar medium. This suggests that a significant portion of this interstellar gas was relatively recently within the Milky Way. Supernova explosions have thrown this matter out of it.

“We have noticed that clusters of interstellar gas near active star-forming regions in the Milky Way are emitting much more X-rays than other regions of the galactic corona. Most likely, we are observing gas that was absorbed by our Galaxy in the distant past. It participated in the process of star formation and then was thrown back into the intergalactic environment, “- explained the professor.

Scientists hope that by further studying these X-ray sources, they will be able to estimate the mass of the galactic corona. This is very important for testing the theories that explain why the mass of all the studied clusters of visible matter in the Universe around us turned out to be approximately two times less than what cosmological theories predict.