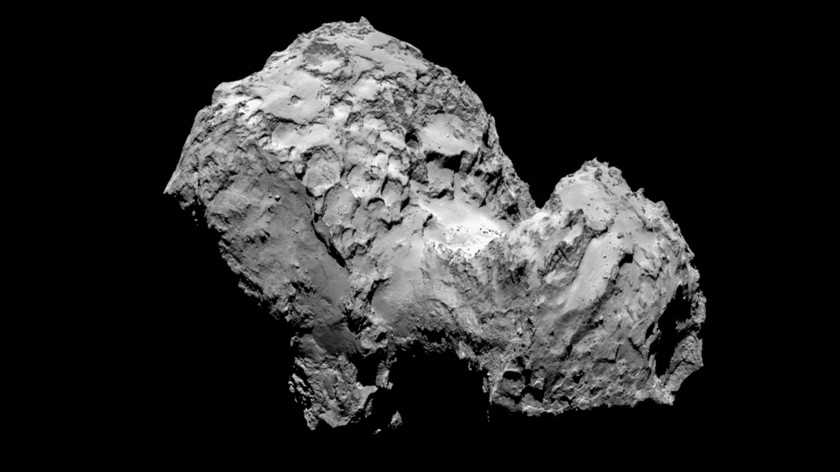 The research groups working on the results of the mission of the European Space Agency to the comet 67P / Churyumova-Gerasimenko, told that rock blocks are rolling on it and cracks are formed. It was also found out that suddenly appeared and then blurred bright spot – it is filled with dry ice inside the comet.

The probe “Rosetta” with the descending module “Fila” was launched to the comet 67P / Churyumova – Gerasimenko in 2004. Coming into the orbit of the comet in 2014, the apparatus made observations of it for two years. In September 2016, the mission was decided to finish, having made a hard landing of “Rosetta” on a comet. This gave scientists the opportunity to get pictures of its surface from close range. According to preliminary estimates, the last photograph of “Rosetta” made from a height of 51 meters. However, after a more detailed examination of the data, ESA experts stated that only 20 meters remained to the surface. 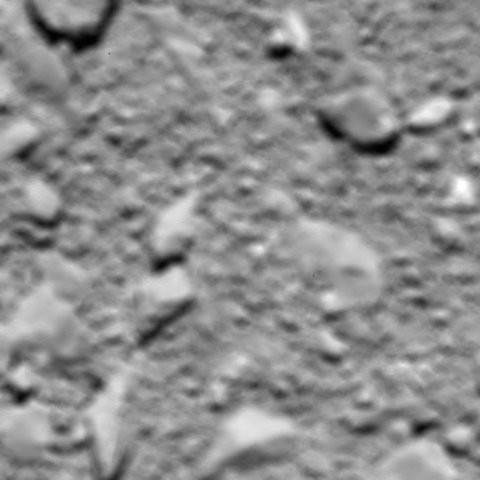 The data received by the station and the downlink module “Fila” are still being processed. Recently, international groups of researchers published the actual results of two-year observations of the comet.

According to the photographs for different periods, scientists noticed changes in the relief: stones moved from the comet, landslides moved from the ledges, and the inner part of the comet opened slightly because of the fractures of the surface fragments. Thus, a rather massive part of the Aswan cliff shattered into fragments. A crack on it 70 meters long and about a meter in width was fixed as early as in the autumn of 2014. In July 2015, a few days after there was a cloud of dust and gas above the surface, there was no part of the cliff in place. But there appeared a bright spot.

“The last time we saw a crack on July 4th, and the absence of any other emissions in the next ten days is a very reliable indication that the cloud is directly related to the collapse of the cliff,” said Maurizio Pakhola, who led the study of the comet in the Ames Research Center .

As for the bright spot, it is the icey interior of the comet. She, according to scientists, was able to reflect six times more light than the rest of the surface, which made it seem much brighter. By the end of December 2015, the stain faded. This indicates that most of the ice has evaporated. And by August 2016 this fragment was leveled with the rest of the surface, there was only a small glimpse.

After a few noticed breaks, probably, there are processes occurring in the bowels of the comet. Approaching the Sun, the heavenly body received more heat and light, while on the comet there were sharp temperature changes. So, on the Aswan cliff in case of sunlight, heating from -143 to +46 ° C occurred in 20 minutes. The impact of such changes on the ice contributed to the damage of the relief.

In a study of another scientific group – from the University of Colorado – the changes that occurred with the comet were noted after it approached the maximum distance to the Sun, and then began to move away from it. Such changes are, in particular, the cracks in the Anuket region. It is located in the narrowest part of the comet, the shape of which is often compared with rubber gum. Earlier it was suggested that 67P was formed as a result of a collision of two celestial bodies, which is why it took on a strange form.

In September 2014, scientists discovered that Anuket cuts a crack about 500 meters long. By December 2014, it had increased by another 30 meters. Also, several cobblestones moved near the crack. Pictures in the summer of 2016 showed that not far from the first formed a second crack – a length of 150 to 300 meters. 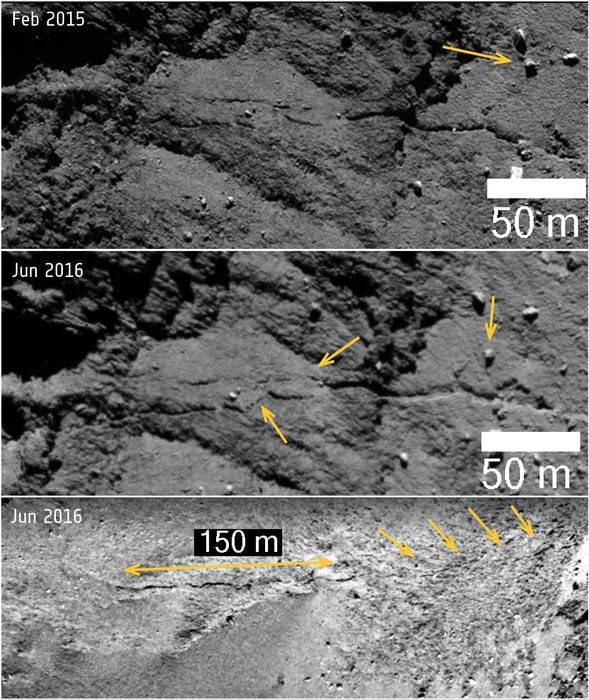 In the Khonsu region, researchers were able to track the movement of another boulder, a larger one. From May 2015 to February 2016, a block 30 meters wide and weighing about 13 tons shifted by 140 meters. The reasons for its movement are not fully understood, but scientists see two versions. The stone could be displaced under the direct impact of the release of matter, which pushed it away. Another assumption is related to the same process, but indirectly. The surface next to the boulder could gradually fade and fall, and he, perhaps, rolled back to a new position.

Nevertheless, the distant past of the comet could be much more active than its present: in two years, especially significant changes in the landscape could not be noticed. This means that most of its features comet Churyumov – Gerasimenko found long before the meeting with Rosetta. It is assumed that this happened during her earlier revolutions around the Sun and, probably, in a different orbit.