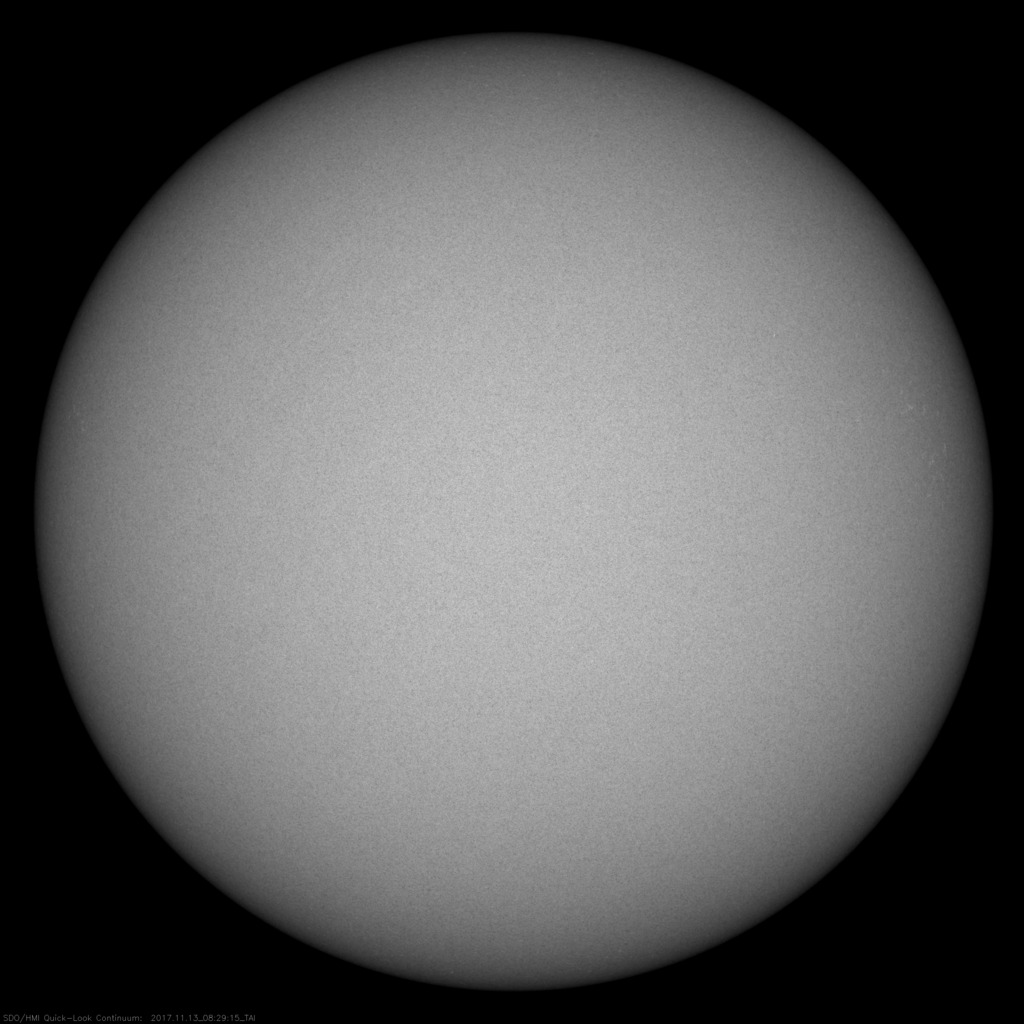 The number of spots on the Sun, considered the main characteristic of the level of solar activity, is rapidly falling to zero. At the present time, no sunspot is observed on the side of the Sun facing the Earth. There are now spots on the reverse side of the Sun, it is difficult to say, but based on the photos of the Sun 2 weeks ago, when this side was facing the Earth, there are no spots there either. Thus, our star is now very close in appearance to the ideal object, without any “flaws”, as it was represented by people before the beginning of the 17th century. The fact that on the perfect celestial body, to which the Sun belonged then, there are spots, so shocked contemporaries that the first reports about this were published anonymously, or in private correspondence, for fear of accusations of heresy. And even after the spots were proven, the “ideality” of the Sun was tried to save, arguing that the spots are clouds, denying the now proven fact that the spots belong to the surface of the Sun.

The number of spots on the Sun is the main parameter, according to which the 11-year solar cycle is measured, the history of which has already been counted for almost 270 years. Once in 11 years the number of spots reaches a maximum, and approximately in the middle between these peaks decreases to the lowest value, called the solar minimum. The nature of these changes remained incomprehensible for almost 200 years and only in the middle of the 20th century it was established that the magnetic field of the Sun changes with a step of 11 years (alternately amplified and weakened). Since the spots are formed in regions of a strong field, the number of spots reaches a maximum at the moments of maximum field strength. The magnetic and associated electric energy of the Sun is the main “fuel” for solar activity (solar flares and emissions of matter are basically electrical and magnetic in nature). For this reason, in the years of the solar cycle maximum, the “explosive” activity of the Sun also grows. In the years of minimum, it is damped on the contrary.

Based on the picture that we are seeing now, the Sun is moving inevitably towards another low, which will be reached in late 2018 – the first half of 2019. On this path, the complex sunspots and associated solar flares should first completely disappear on the Sun, which seems to have already happened. Then in the corona of the Sun the hot plasma regions disappear, and the X-ray radiation of the Sun produced by them falls to almost zero background level. The remaining sunspots are extremely simplified and, although visually present on the disk, can no longer either heat the plasma or produce flares. At the next stage, the spots on the Sun completely disappear, although the regions of the increased magnetic field are still visible on the disk. Finally, at the minimum point, the solar magnetic energy almost completely vanishes, and it degenerates into an almost perfectly symmetric object without any singularities. In this form, our star can exist from several months to a year, after which new fluxes of the magnetic field begin to float from the depth of the Sun, the first spots appear, and the flywheel of the solar cycle starts a new 11-year revolution.

At the moment, the sun, apparently, began to enter the third stage, characterized by a gradual disappearance of spots. At this stage, individual spots and even faint flashes may still appear for a short time, but this is only the last fading burst of activity. The final disappearance of sunspots from the Sun may occur within the next 2-3 months.

Although low solar activity seems to be a favorable situation for the Earth, scientists in their “apocalyptic predictions,” paradoxically, very rarely connect them with the high activity of the Sun, and on the contrary, are afraid of being low. It is caused by the fact that the Sun in the history accessible to mankind never produced super-flashes that can affect life. The periods of the “freezing” of the solar cycle in history were observed and showed a correlation with the climate. In particular, the last so-called small glacial period in the history of the Earth, observed at the junction of the 17th and 18th centuries, coincided in time with the known failure of the solar cycle (Maunder minimum), during which for almost 50 years there were almost no sunspots on the sun – that is, Activity froze for several decades at the minimum point.

Fears about whether the Sun will come out of the next minimum, and whether there will be a malfunction, during which it will remain in it, are voiced at the approach of each solar minimum. Over the past 200 years, however, there have been no repetitions of the situation with Maunder’s minimum. From what is visible on the Sun now, its evolution is still in full accordance with the behavior that was observed during the previous 11-year cycles. What will happen next, will show further research.