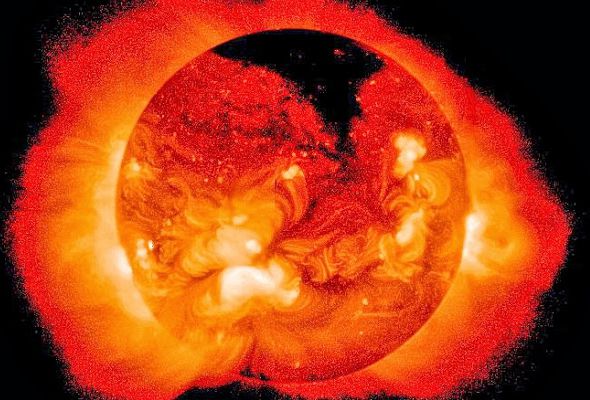 American professionals working in the space Agency NASA has published a notification that due to recent examinations, has identified an enormous coronal hole on the Sun.

Photographic evidence of such a discovery, were received by the Agency, which explored the space in the period from 17 to 19 may 2016. The images were made by scientists from the Observatory to monitor Solar changes. A careful study of images can be considered a huge area of the blackout – this is the coronal hole.

These parts are characterized by low density and low temperature regime of the substance of the crown. Unfortunately, such objects have not been studied from all sides, namely, the experts don’t know what phenomenon produces the current anomaly of the Sun. Coronal holes include in its shell reduced the number of solar matter and have a temperature, which is also much less than in the rest of the star. That’s actually why the area looks more shaded than the rest of the space.

However, scientists came to the same conclusion that the origin of the solar wind – the result of blackouts on the daily luminary. American NASA at the moment, it’s difficult to answer the question, when will you advance in the field of studying such areas. At the same time, they emphasize that the study of coronal holes will help to investigate the situation space around the Earth more clear and understandable.