The sun is facing an avalanche of comets 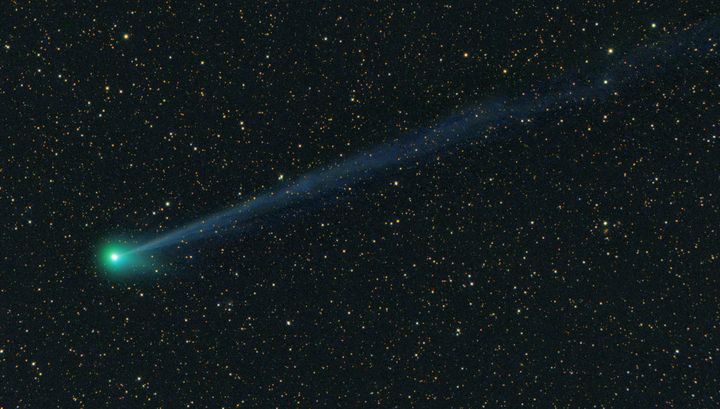 Everything is moving. For astronomers this is not a quote from a collection of banalities, but a fact that one has to deal with daily. The Earth turns around the Sun, the Sun moves relative to the nearest stars (incidentally, at a speed of 19 kilometers per second) and along with them – around the center of the Galaxy (which is 220 km / s). The Galaxy itself has its own movement, intending to face the Andromeda Nebula, and together with the entire Local Group it rushes to the cluster in the constellation of the Virgin, per second flying 400 kilometers.

Writers of fantastic films like to send their characters to the past or the future. But, if the time machine and delivered someone to the same point of space, where the start was, after centuries and millennia – there would not be Earth. It is clear that this trip would immediately end.

But the movements of celestial bodies are important not only for hypothetical time travelers. According to astronomers, the Sun is in the center of a huge cluster of ice blocks, known as the Oort Cloud. Moreover, even the nearest objects of the Cloud are thousands of times farther from the Earth than Pluto, so they have not yet been able to see directly. But experts believe that they become long-period comets.

When another star in its galactic dance approaches the Sun, its gravity breaks a delicate balance, in which the cosmic ice loops circumnavigate our luminary. One of them changes its trajectory and begins its journey deep into the solar system, near the sun growing a picturesque tail, and then getting rid of it. Turnover in its new orbit space traveler does about a hundred thousand years.

But, having invaded the possessions of the great planets, it can be captured by their attraction. And then there is a large-scale clash, similar to the Tunguska explosion. And if an unexpected visitor is bigger, the matter may end very badly for humanity.

It’s no surprise that astronomers want to know with what kind of stars we have such close contacts. A new study sheds light on this issue. The data were obtained using the Gaia space telescope.

We have already talked about how important it is for astrophysicists to be able to determine distances. And if supernovae are used for this purpose on the intergalactic expanses, then in the nearest neighborhood of the Earth the ball is governed by the parallax method. Its advantage is that it relies not on physical models that can be revised, but on the most reliable foundation in the world – ordinary geometry.

We go out onto the road and notice some remote object away from it, for example, a television tower. We can note in what direction it is from us. Now we will pass along the road a kilometer or two. The direction to the tower will change. By accurately measuring the angle to which it has changed, and knowing how much we have passed, we can calculate the distance to the tower. This is a school problem for triangles.

Of course, the direction to the most distant objects varies insignificantly (that’s why the Sun and the Moon “pursue” us when we go in the car). To the angle has changed significantly, you need to go a little more. But, remaining on Earth, astronomers found it difficult to pass more than the radius of the earth’s orbit. That’s why “Gaia”, the space cartographer, was launched. Moving along a very elongated trajectory, it can determine the distances to the luminaries and the speed of their movement.

After 14 months of operation, the first catalog was published, including distances and speeds for more than two million stars. It turned out that over the next five million years about three hundred thousand neighbors in the Galaxy will come to tea for tea.

With one of these luminaries, Gliese 710, we have a particularly close contact. This has long been known to astronomers, but new data have allowed us to specify specific figures. The distance at the time of the meeting is only sixteen thousand astronomical units, that is, the alien star unceremoniously invades directly into the Oort cloud. That’s where you want to shout: “Observe the distance!”.

Such a visit is fraught with a “cometopad” with unpredictable consequences. One thing is consoling: it will take place in 1.3 million years. A reasonable man has been enough for two hundred thousand years from the time of his appearance on Earth in order to decipher the genome, to split the atom and to go out into space. Probably, in a million or more years, he will either die long ago, if he is not wise enough for his reason, or he will extinguish the uncomfortable stars with the cotton of his hands.