The sun will incinerate the Earth, destroying all life on the planet 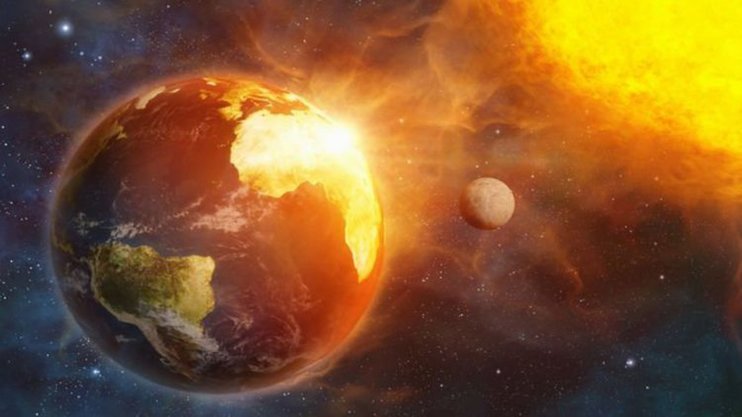 Leading Harvard scientist Avi Loeb made a statement that human civilization would most likely die out from self-wounds long before the sun poses a threat to Earth’s existence.

Once in billions of years, the sun will destroy our planet. When a star runs out of hydrogen and helium atoms to burn in the core, it glows brighter and brighter. In the end, the sun will bring down enough powerful light to Earth to burn the oceans, melt the polar glaciers and deprive our atmosphere of all moisture, virtually destroying all life.

However, according to Harvard astrophysicist Avi Loeb, most likely we will all be dead by then anyway. In a recently published article, Loeb noted the existence of numerous options for humanity to maintain its view from the sun. In particular, we can start by reducing the effects of global warming.

Avi Loeb is known in the world not only as a researcher of black holes, but also as an ardent supporter of the idea of ​​interplanetary colonization. The scientist is a member of the Breakthrough Starshot project, which is developing starships or spaceships of the future. He believes that humanity simply needs to have something to fly into distant and unknown worlds, since Loeb considers the risk of self-destruction of civilization on Earth to be extremely high.

Avi believes that modern technology will further accelerate the process of global warming. As a result, the Sun literally incinerates the Earth, destroying all life on the planet.

The scientist also added that our civilization can build some kind of “giant structure” that can be brought to the optimal orbital distance from an increasingly hot star. Thanks to such a device, it will be possible to retire for dozens of light years and colonize some exoplanet.

“Since it took modern people only 100 thousand years to adapt and move from living in the savannahs and forests of Africa to living in tiny apartments in Manhattan, one can justifiably expect the transition from Manhattan to life in space for tens of thousands of times longer.” – he explained.

Once humanity successfully colonizes nearby and interstellar spaces, Loeb added, we can make “genetically identical copies” of animals and plants that we would like to preserve and distribute in other star systems. This can reduce the risk of total destruction due to a single disaster.

However, Loeb finished his blog post on a depressing note. According to him, humanity will destroy itself long before the sun burns out life on Earth. “I increasingly believe that our civilization will disappear as a result of the wounds inflicted on itself, long before the Sun begins to pose a threat. Why do I believe in it? Because the dead silence that we hear from the many potentially life-worthy exoplanets, may mean that developed civilizations live less than their parent stars, “the astronomer is convinced.

Avi Loeb writes that humanity needs to “consider the possibility of space travel outside the solar system.” To do this, he added, we need to build an “artificial world” that can travel between stars and neighboring, potentially habitable planets. According to him, this spacecraft and the human environment “will be a very important modernization of the International Space Station (ISS).”

Obviously, the scientist noted that the solution will not bring much benefit to save people on Earth today, but it is more important for Loeb to ensure the longevity of our species as a whole.

Loeb is sure that extraterrestrial life exists or existed in the universe. In October 2017, the asteroid Oumuamua visited the Solar System – it became the first interstellar asteroid known to science. His movement was recorded by an automated telescope Pan-STARRS1. Scientists have found that there is a lot of organic matter on its surface.

The assumption that Oumuamua may have an unnatural origin, was voiced by scientists from the Harvard-Smithsonian Center for Astrophysics, led by Avi Loeb. Researchers noticed that the object moves at a high speed – more than 315 thousand km / h with slight acceleration, has a high reflectivity and follows a strange trajectory. The scientist is sure that Oumuamua was an advanced alien spacecraft engaged in the exploration of the Earth and nearby planets for life. Since then, this hypothesis has been rejected by many astronomers.