The sunlight slows down the rotation of its outer layers 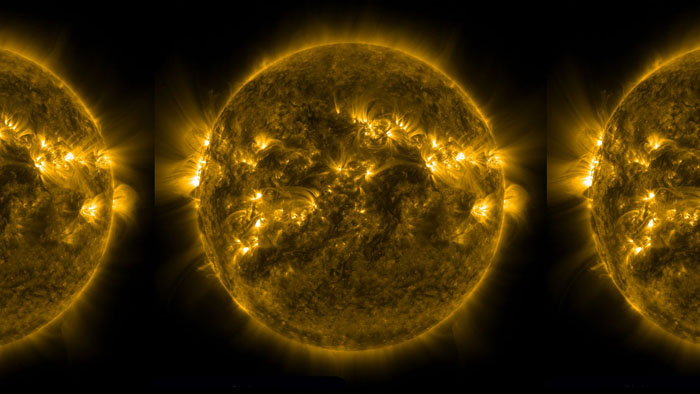 Sunlight slows down the rotation of the outer layers of a star, stealing some of his momentum. This conclusion was made by researchers from the United States and Brazil after studying sound waves passing through the visible surface of the Sun – the photosphere. The aim of the researchers was to determine how fast the star rotates at different depths.

The scientific world in the 80-ies of the last century found that the outer part of the photosphere rotates more slowly for the remainder. But physicists did not understand why there is this slowdown.

To solve a long puzzle, a team of scientists under the guidance of Ian Cunningham and Jeff Kuhn from the Institute of astronomy at the University of Hawaii watched the sound waves from the limb (edge) of the disk stars using the tools of the solar dynamics Observatory of NASA (SDO).

Astronomers announced that they found, they believe the reason why the outer layers of the Sun rotates slower than the other.

Experts carefully processed images obtained three and a half years of operation, the SDO with the help of various filters. Thanks to the work done they were able to take a new look at a few of the outer layers of the Sun. This, in turn, helped them to find out what the most braking happens in the 70-kilometer zone, and calculate the circulation rate of each visible layer. So, they confirmed that the outer layer rotates slower than the other by about five percent speed.

Note that in the upper 70 km of the photosphere of the Sun begins to become transparent and photons can escape into space in the form of sunlight.

The astronomers also used the results of previous studies showed that interstellar space dust is slowing in the face of the solar photons, as it loses the momentum of its movement.

These photons do quite a long journey. Created during nuclear fusion inside the core of the Sun, the particles first enter the dense zone of radiant transfer, which is two-thirds of the radius of the star.

Photons in this part of the star bounce, colliding with atomic nuclei, how many mirrors and then, after millions of years finally reach the outer convective layer of the star. In this zone the temperature is low enough that the atoms can absorb photons. Here the formation of unions of atoms and photons when they reach 70 kilometers, the atoms are cooled so much that emit photons to space.

A huge number of such releases over the 4.5 billion years life of the Sun, as scientists believe, led to the slower rotational speed of the outer layer of the star. It astronomers see today.