The surface of the Moon was renewed after the crust hardening 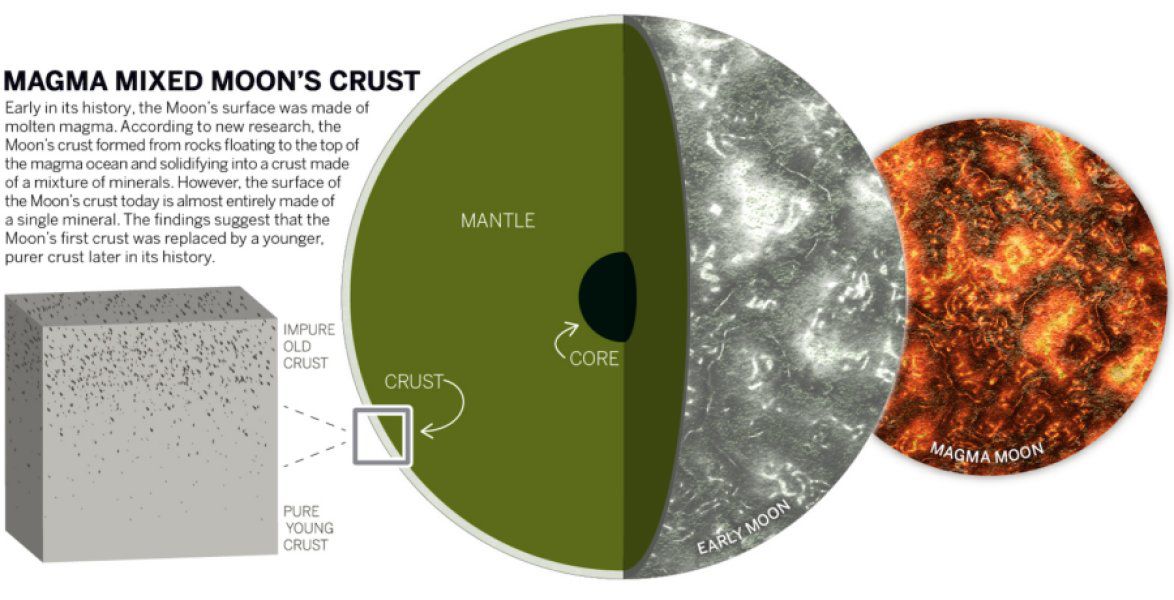 The history of the formation of the moon seems to modern scientists a very “stormy”. Formed from a fragment of the Earth, which was knocked out of our planet as a result of a powerful cosmic collision, the Moon was at the first stages of its formation in the molten state, that is, on its surface was a global ocean of molten magma, which only after a while gradually cooled and solidified, that solid surface that we see on the Moon today.

When determining the mineral composition of the substance of the surface of the moon, the researchers were surprised to find that it consists almost entirely (by 98 percent) of one mineral – plagioclase. To explain this fact, a hypothesis was proposed according to which a layer of plagioclase “floats” in the magma ocean in the early years of the formation of the moon, so that when crystallized, give an almost pure mineral covering the entire surface of the natural satellite of the Earth. This hypothesis is based on the assumption that the viscosity of the magma melt had a sufficiently low value for the rapid emergence of a layer of plagioclase in a mixed initial melt. In a new study, a team led by Nick Dygert, assistant professor at the University of Tennessee, USA, decided to test, using laboratory experiments, whether the melt viscosity could actually have a low viscosity value for the proposed processes.

Having carried out experiments in the laboratory with the heating and melting of a mixture of rocks close in composition to the Moon, using X-ray synchrotron radiation, the Daigert team confirmed that the viscosity of the melt was indeed very low, and a layer of plagioclase with this viscosity had the ability to float to the surface of the melt. However, at the same time, scientists found that the floating layer of plagioclase could not reach purity of 98 percent under these conditions, because it was contaminated with other components of the melt. Therefore, refuting the initial hypothesis as a result of the laboratory test, the Daigert team proposed a different version according to which the original upper layer of the cortex of the Moon could be removed from its surface as a result of secondary processes such as the fall of asteroids, exposing the underlying layers of pure plagioclase.