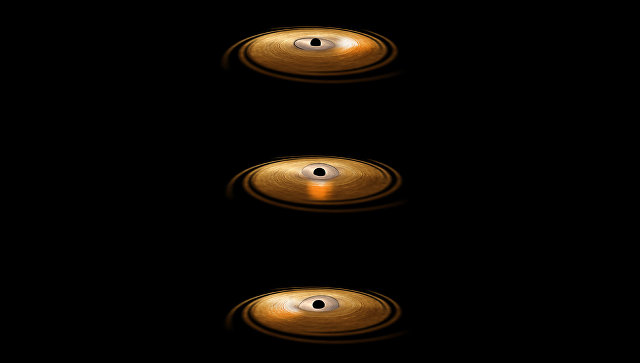 Matter near the black hole revolves around her not in a straight line, as previously thought, and “bobs” up and down like waves in the funnel in the bathroom or a glass of water, say astronomers.

“This process can be compared to, if you took a spoonful, put it in a jar of honey and began to rotate. Imagine that honey is the space and all the “blotches” that it is, will get involved in the movement and rotations of a spoon. In the real world this would mean that the nature of the motion of any object rotating around a spinning black hole will change with its movement,” said Adam Ingram (Adam Ingram) from the University of Amsterdam (the Netherlands).

After the opening of the first black holes in the 80 years of the last century and x-ray radiation from their accretion disk – the “donut” of matter devoured by a black hole, scientists are faced with the first mystery of these unusual objects. They found that their glow flickered”, gradually changing in brightness with a frequency of approximately tens of seconds or fractions of a second.

Ingram and his colleagues figured out why this happens, watching the black hole H 1743-322 in the constellation Scorpius, remote from the earth at a distance of 30 thousand light-years, with two orbiting telescopes – the European XMM-Newton and NuSTAR American.

Multi-day observations of the black hole has allowed scientists to find unexpected shifts of iron lines in the x-ray spectrum of the accretion disk of a black hole for the first time indicated that he sways like waves in a glass stir the water while rotating around the black hole. These oscillations and give rise to those quasi-periodic fluctuations in the brightness of x-rays opened in the 80 years of the 20th century.

As Ingram explains, this behavior is predicted by the theory of relativity — scientists call it the gravitational precession or the lense-Thirring effect. It is a relativistic analogue of the so-called Coriolis force is familiar to all the lessons of school geography concept, explaining why the right banks of rivers in the Northern hemisphere is cooler and the winds are deflected to the West. In space, it is shown that any object rotating orbit of satellites makes it “rock” up and down.

Black holes are not the only example of the lense-Thirring effect in space – previously, a similar behavior was reported for the systems of white dwarfs and neutron stars. The discovery of its more potent analogue of black holes, as noted by Ingram, will help scientists to more rigorously test calculations of the theory of relativity, and also to precisely measure the masses of black holes.